Shaheer Sheikh has shared a picture of him from the sets of his previous popular serial, Mahabharat giving it a lockdown it. Check out the post here.

Amid the nationwide lockdown, many celebrities are spending their time doing several activities. Most of them are re-visiting their old days and cherishing the memories. Joining the bandwagon, television star Shaheer Sheikh has shared a picture of him from the sets of his previous popular serial, Mahabharat. And seems like the actor has related the post to the lockdown.

Shaheer Sheikh took to Instagram to share a picture of him from the set of Mahabharat. In the picture, he can be seen joining his hand where he seems to be apologising for something. The actor connected this post to the current lockdown as he wrote saying that he is sorry as he won’t be able to go. “#DownMemoryLane #hopefullytomorrow.” Check out the picture here.

Seeing this picture, fans went on to comment on all things nice on the post. Some commented on the throwback picture he shared, while some commented on the caption.  Some of them wrote saying, “It’s okay you can go tomorrow,” “Nice picture,” “You are my favourite,” and many more. Check out a few more comments below. 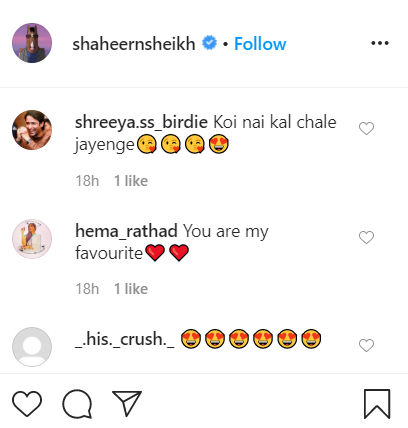 A few days ago, he shared a collage of himself in two different avatars. One of them was snapped when he played Anant 's role in the daily soap Navya: Naye Dhadkan Naye Sawaal, while the other picture has been from the time he played Arjun 's character in the Mahabharat series. Shaheer Sheikh was 75kgs when he began preparing for the role of Arjun and gained over 20 kgs and turned 95kgs for the mythological show.

Apart from this post, he also shared throwback pictures from the set of Mahabharat with his onscreen brothers. Along with the post, he also wrote, "The art of chilling on the sets.” Check out the pictures below.

Shaheer Sheikh has currently been seen playing the lead in the popular serial Yeh Rishtey Hain Pyaar Ke alongside Rhea Sharma. The show is a spin-off series of Star Plus' Yeh Rishta Kya Kehlata Hai featuring Mohsin Khan and Shivangi Joshi in the lead. Shaheer is essaying the role of Abir in the show and has been receiving praise for it.