Shakti Mohan took to her Instagram account to share a video of two snakes fighting. She also asked Mouni Roy if she has anything to do with this. Read more.

Shakti Mohan shared the video on her Instagram account and gave it a hilarious caption. In the caption of the video, Shakti Mohan asked Mouni Roy if she had anything to do with the snakes fighting. For those who are unaware, Mouni Roy portrayed the role of a shapeshifting serpent in the supernatural show Naagin. Shakti Mohan captioned the video as "Caption this. Saw ðŸðŸ in the farm today morning â˜€ï¸ Dayummmm never seen anything like it ðŸ˜³ðŸ˜³ðŸ˜³ðŸ˜³ @imouniroy you have anything to do with this ðŸ™ˆ ðŸ¤ª ðŸ¥´ Don't kill me ðŸƒ‍â™€ï¸ðŸƒ‍â™€ï¸ðŸ’¨ ðŸŽ¥ @neetimohan18".

Here is a look at the video that Shakti Mohan shared

Mouni Roy was left shocked after watching this video. The actor commented on the video saying "Omgggggggg!!!!!ðŸ˜ðŸ˜ðŸ˜ðŸ˜ But I am petrified of em!!!!!!!!" and also "But beautiful ♥ï¸". Here is a look at Mouni Roy's comments on Shakti Mohan's video. 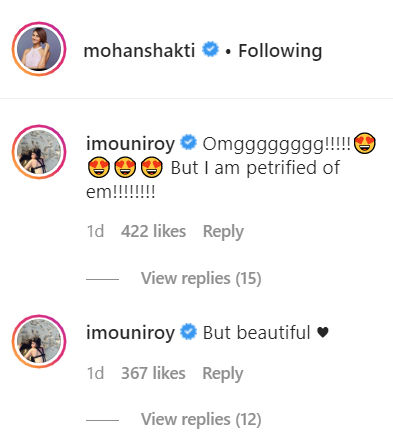 About Shakti Mohan, she started her career as a dancer form a popular dance reality show Dance India Dance. Later Shakti Mohan became a judge on a dance show Dance Plus. On the show, Shakti Mohan was judging along with Dharmesh, Punit Pathak under the guidance of popular choreographer Remo D'Souza. Raghav Juyal who is also a popular dancer was hosting the show. These choreographers started their journey from Dance India Dance.

Also Read: Urvashi Rautela Or Mouni Roy: Who Nailed It In The Black Gown?

Also Read: Mouni Roy Posts A Goofy Pic & Answers "what Would You Do With A Brain If You Had One?"