Shehnaaz Gill's father shared that the former's grandmother was admitted to the hospital due to liver issues. Fans in huge numbers sent love and prayers.

Bigg Boss 13 contestant Shehnaz Gill's father Santokh Singh Sukh, took to his Instagram on May 6 and shared that his mother has been hospitalised as she was having trouble in her liver. Shehnaaz Gill's paternal grandmother has been reportedly having some issues and fans in huge numbers have sent love and prayers for her speedy recovery. Take a look. 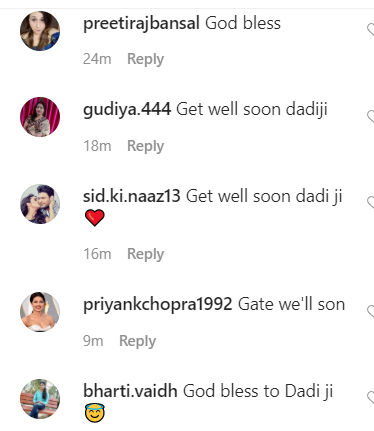 During her stint in Bigg Boss 13, Shehnaaz Gill quite often spoke about her dadi and also talked about the fun side of her. Moreover, Gill also shared some stories narrated to her by her grandmother.

Shehnaaz Gill has been busy with her new projects in the industry. After impressing fans with her performance in the music album titled Bhula Dunga, alongside Sidharth Shukla, she has reportedly now bagged another single. Shehnaz will be seen opposite popular Punjabi singer-actor Jassie Gill. As per reports, the new song will be a lively number, as Shehnaaz's previous work was an emotional melody. Moreover, a teaser to the song is soon expected to be out by next week. The small clip has been reportedly shot by the actors at their homes amid COVID-19 lockdown.
Sidharth Shukla, Shehnaaz Gill's chemistry in 'Bhula Dunga' BTS video leaves fans swooning

Recently, Shehnaaz Gill shared a BTS video of the song Bhula Dunga. In the clip, Sidharth and Shehnaaz are seen shooting for a moment wherein the two are sitting in front of a bathtub on the floor. While Sidharth is sitting behind, Shehnaaz can be seen leaning on him. The two stars are enjoying some wine in the video. Fans of Sidharth Shukla and Shehnaaz Gill are swooning over the duo's chemistry. Check out the video here.

PEOPLE HAVE PLEDGED SO FAR
LATEST NEWS
View all
13 hours ago
Kiku sharda’s son turns 15; actor shares pic of 'little controlled celebration'
15 hours ago
Parth samthaan travels back to his hometown to pune amid lockdown
12 hours ago
From eid celebrations to workout sessions, here's how hina khan's weekend looked, see pics
12 hours ago
Will ranbir kapoor know any better than jon snow in 'game of thrones' desi version? check
13 hours ago
Himanshi khurana shares monochrome picture with asim riaz; check it out here