Television star Shivangi Joshi recently lost her grandfather after he breathed his last yesterday, i.e. May 18, 2020. The Yeh Rishta Kya Kehlata Hai actor took to social media to break the unfortunate news with her fans and to mourn her grandpa's demise. Joshi's grandfather bid adieu to the world on her 25th birthday.

Shivangi Joshi lost her grandfather on her 25th birthday

One of television's eminent faces, Shivangi Joshi was all set to go live with her fans on Instagram for thanking everyone for their heartfelt birthday wishes on her 25th birthday. However, Joshi later apologized to everyone for not being able to go live with them because she lost her grandpa on her birthday and was left heartbroken and bereaved. The Ye Rishta Kya Kehlata Hai actor broke the grievous news a couple of hours ago on her Instagram stories.

In the first story that she shared on her Instagram handle, Shivangi Joshi apologized to her fans for not being able to go live as she wrote, "Hi guys, due to some personal reason I will not be able to come live today. Sorry, and thank you for understanding."

In the following Insta story, the actor revealed the heartbreaking reason behind the same as she wrote,'Unfortunate to lose my grandfather yesterday, may he smile and look upon us from the sky. What's more unfortunate is that the television actor had to bear the loss of her beloved grandfather on her 25th birthday as she was quite close to her grandpa." 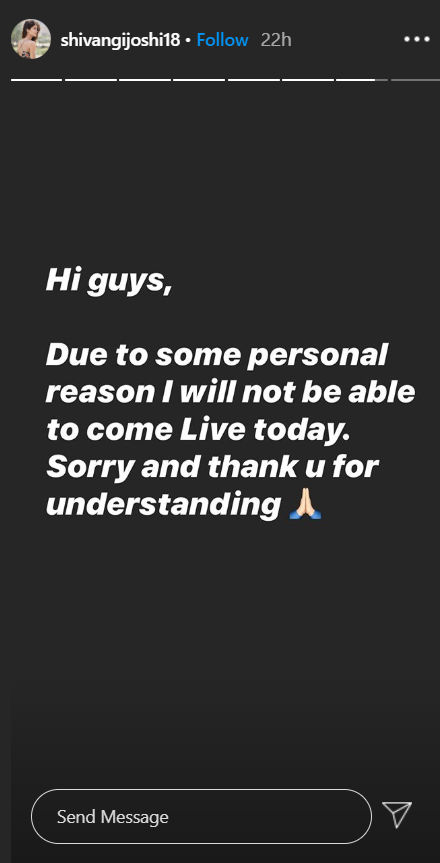 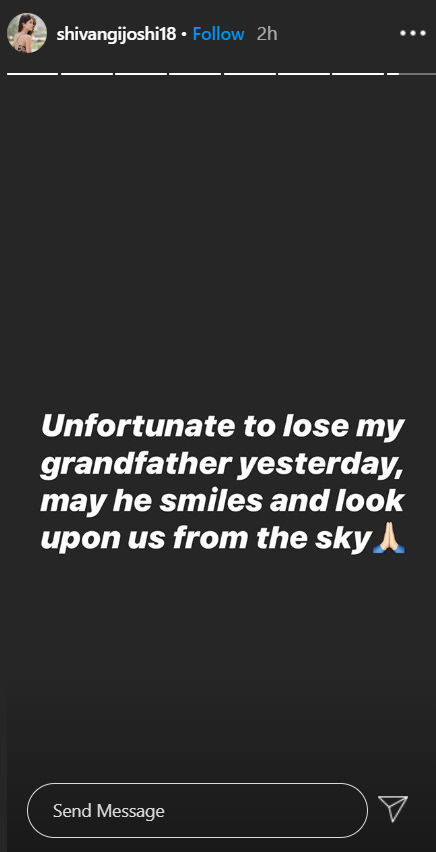 While all her fans who were eagerly waiting for their favourite actor to go live with them, they were absolutely clueless about the sorrowful event until today morning as to why Joshi suddenly dropped her plan of interacting with them. However, after she broke the news, heartfelt condolences from fans on social media started pouring in. The television star's fans have got her back as they are standing with her in these difficult times and are also consoling her to stay strong.

On the work front, Shivangi Joshi has been popularly known as Naira Goenka as she essays her role in one of the most popular soap operas of contemporary times, Yeh Rishta Kya Kehlata Hai. Joshi has been a part of the show for four years now. Apart from YRKKH, the actor has also starred in several other shows like Begusarai, Beintehaa, and Love By Chance to name a few. However, due to the Coronavirus outbreak, the shoot of the show has been halted and Joshi is currently living with her family in her hometown, Dehradun.