On February 14, Sidharth Shukla and Shehnaaz Gill surprised their fans by sharing an adorable video. Fans showered love on their post in no time.

On February 14, Sidharth Shukla and Shehnaaz Gill surprised their fans by sharing an adorable video. Shehnaaz Gill and Sidharth Sukla’s chemistry is well known in the industry. Their fans who lovingly call them Sidnaaz were left in awe as the couple shared a video of them giving a head massage to each other. Fans showered love on their post in no time. Have a look at their video below.

Also read: Sidharth Shukla Weekly Roundup: A Look At What The Actor Was Up To This Week

The video shared by Sidharth started with him giving a head massage to Shehnaaz. While doing so, they both were having a conversation and in which Sidharth tried to pull Shehnaz’s leg. Shehnaaz interestingly responded to him. He said that she wouldn’t have any hair left on her head when she would grow old. On the other hand, she said that Mama Earth onion hair oil will prevent this and he should be one worrying about hair fall. Later, even she gave a head massage to Sidharth.

In his caption, Sidharth wrote that he tried to hard to mess with Shehnaaz but she got him at the moment he tried to scare her with hair fall. He further wrote that hair fall was something that would never be an issue for them because the Onion Hair Oil by Mama Earth had got them covered. Now onwards, every Sunday would be for #SidnaazKiChampi. He also urged his fans to buy the product and said one should go to www.mamaearth.in now and check the product out. One could also get a 20% off by using their code - SIDNAAZ20. He added an important message that read, “Do remember, whenever you buy from them, you contribute to the environment because they link every order to a tree and are planning to plant 1M trees through this initiative.” 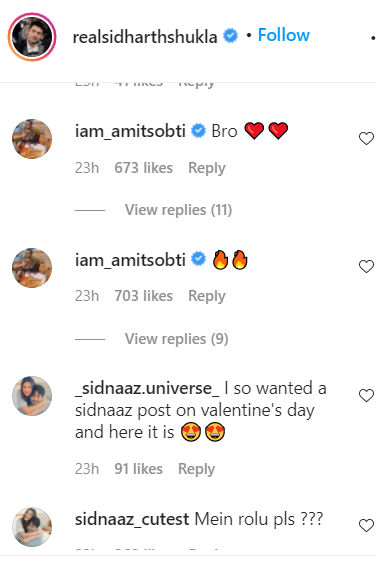 Sidharth Shukla and Shehnaaz Gill have starred in various music videos such as Bhula Dunga and Shona Shona. Sidharth and Shehnaaz also have another music video coming up very soon. The song is sung by Shreya Ghosal.

More about Shehnaaz and Sidharth -

Shehnaaz Gill rose to fame from her stint in the Bigg Boss 13. She has featured in several Punjabi music videos and films. She was seen in Sat Shri Akaal England, Veham, Range and Sidewalk. Sidharth Shukla became a household name after he featured in Balika Vadhu: Kacchi Umar Ke Pakke Rishte. He has participated in shows such as Fear Factor: Khatron Ke Khiladi 7 and Jhalak Dikhhla Jaa 6. He has also featured in the Bollywood film Humpty Sharma Ki Dulhania. He will be soon seen in the upcoming web series Broken but Beautiful 3.

Also read: Shehnaaz Gill Shares A Video Of Herself Falling In The Snow, Fans Call Her 'cutest'