Shehnaaz Gill Shares A Video Of Herself Falling In The Snow, Fans Call Her 'cutest'

Shehnaaz Gill recently took to Instagram and shared a video of herself twirling and falling in the snow. Read on to know more about her latest Instagram post.

Shehnaaz Gill never fails to entertain her fans and followers on Instagram with her funny antics. The Waada Hai actor is currently in Jammu and Kashmir for her next project and has been sharing a lot of pictures from heaven on Earth. Read on to know about Shehnaaz Gill's latest Instagram post, which is sure to make you laugh.

Actor Shehnaaz Gill is shooting in Kashmir and took to Instagram to share some behind the scene clips about how she is having fun in the snow-covered land. Gill took to the social networking site earlier and posted a video of her wearing the traditional Kashmiri outfit and performing on Mission Kashmir's popular song Bumbro. While that video was loved by her fans and followers, the next post revealed an outtake from that dance sequence, where Shehnaaz slipped and fell on the snow. She is wearing an emerald green velvet ensemble and paired it with a bright pink dupatta and silver jewellery. You can take a look at the hilarious video here.

Also Read | Shehnaaz Gill Posts Photos Of Herself In Kashmir, Fans Feel In Love With Her 'pahadi' Look

The video shows Shehnaaz twirling and falling down in slow, while other crew members rush to help her. The Punjabi actor has a huge following of close to 7 million people on Instagram and her hilarious behind the scenes video received 422k likes within a few hours of posting it. Fans and followers of the star posted laughter emojis in the comments section and called her the cutest. While one comment read, "Shehnaaz Rocks On the Snowâ¤ï¸ðŸŽ‰ðŸ˜", another follower wrote, "Shehnaz gill is love ðŸ˜ðŸ˜ðŸ˜" You can see a few comments on her video here.

Also Read | Shehnaaz Gill Poses With Her Young Fans On Flight In This Unseen Pic; Take A Look 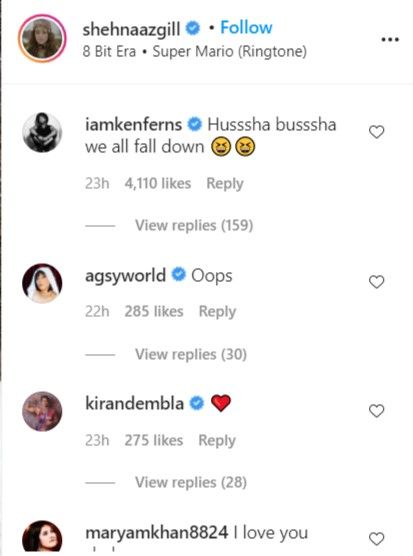 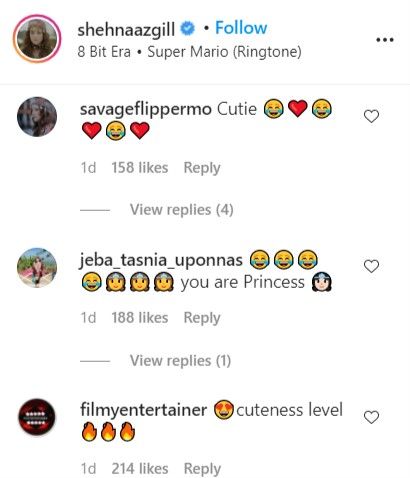 On the work front, Gill last teamed up with Sidharth Shukla for a music album titled Bhula Dunga. She was also seen in the peppy number, Shona Shona, which released in 2020. Shehnaaz's earlier video on Instagram, where she performed on Hrithik Roshan and Preity Zinta's dance number Bumbro, went viral on the internet in no time. The video has been viewed 2 million times already in a day and her moves are being appreciated as well by fans and followers. Her caption for that post read, "When in Kashmir do it Their way! Had to dance on this epic song at the heaven on earth...#Kashmir ♥ï¸" You can see her post here.

Also Read | Shehnaaz Gill's Weekly Roundup: From Her Upcoming Song To Her Endorsements