The fact that the first person Sidharth Shukla posed after his Bigg Boss victory was his mother showed their close bond. The actor opened up on this equation for a platform too had gone viral at that time. So, it goes without saying that Mother’s Day will be a special occasion for him.

READ: Sidharth Shukla Jokes About 'running Out Of Pictures' As He Posts Two Similar Photos

Sidharth posted a heartwarming picture with his mother Rita Shukla, to mark the occasion. The actor seemed to share their quality of being ‘grounded’ as he wrote they were ‘grounded literally’ in the kitchen. The moment of the mother-son duo looking into each other’s eyes and smiling, while brushing their cups together, was a heartwarming sight for the fans.

READ:Rashami Desai Admits To Watching Videos Of Sidharth Shukla, Says 'I Am In Touch With Him'

Apart from the love of the Shuklas, another key detail delighted the fans. The cups that Sidharth and his mother are using in the picture are the ones that his fans have created for him.

Like the fans like to call each other, ‘Sid hearts’, and numerous pictures of Sidharth were seen on the cups. Fans went gaga over the importance Sidharth gave to his fans and made them ‘cry’ and convey their gratitude. 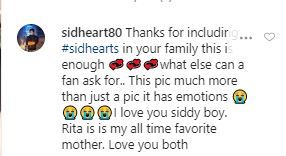 Meanwhile, Sidharth has been spending time during the lockdown by doing chores, among other activities. He had also featured in a video with TV celebs to send the message to stay at home. On the professional front, Sidharth featured in a music video with Bigg Boss co-contestant and close friend Shehnaaz Gill.

READ: Shehnaaz Gill And Sidharth Shukla Mourn The Death Of Two Sidnaaz Fans Due To COVID-19

PEOPLE HAVE PLEDGED SO FAR
LATEST NEWS
View all
1 day ago
Gaurav Gera reveals that his famous character 'Chutki' was Kiku Sharda's idea
1 day ago
25 years of SaReGaMaPa: Participants who are making waves in music industry
1 day ago
Jennifer Winget's Birthday: Times when the 'Beyhadh' Actor Gave Major Fashion Goals
1 day ago
25 years of 'SaReGaMaPa': Singers who won in life although not during the show
11 hours ago
Cush Jumbo exits 'The Good Fight' ahead of season five