Teri Galliyan actor Sonal Vengurlekar revealed a touching incident of her make-up man offering to help her during her current financial crunch. Read ahead-

Currently, the entire world is on hold due to the global pandemic. The coronavirus has affected the lives of millions, regardless of their race, caste, sex, and standards. The only way to get through a crisis situation like this is by sticking together. Recently, the Teri Galliyan actor, Sonal Vengurlekar revealed how touched she got when her make-up man offered to help her with her current financial crunch. Sonal Vengurlekar took to her Instagram account to share her plight with the world. Read ahead to know more-

Sonal Vengurlekar revealed that she has been suffering from a major financial issue since the producers of her show turned their back on her. However, what made Sonal emotional is the fact that even in times of need like these, her makeup man offered her a helping hand. In usual scenarios, Sonal is the one helping her crew, but this time the case was the other way round.

Sonal took to her Instagram to share a conversation between her makeup man and herself. She revealed that she called him as a courtesy to check up on him and his financial situation as his wife was due for delivery. She said that soon into the conversation he realised that the actor was broke herself and offered her â‚¹15,000 that he had saved and kept aside for his wife’s delivery. The amount was all that the man had with him but did not hesitate even once in offering it to her.

Sonal Vengurlekar, whose lakhs of rupees are stuck with a particular production, had watery eyes when she came across this incident. She took to her Instagram, thanking her makeup man in front of the world and taunting the people who are not releasing her money yet. As a pick on those producers, Sonal mentioned “waqt aa gaya hai, so called Ameer log, dil se bhi ameer ho jaye, feeling sad for such people” in her post. She also mentioned that those producers have completely shut her out and have stopped taking her calls. In fact, they have even blocked the actor.

Fans showed Sonal Vengurlekar immense love and spammed the post with various comments in her support. 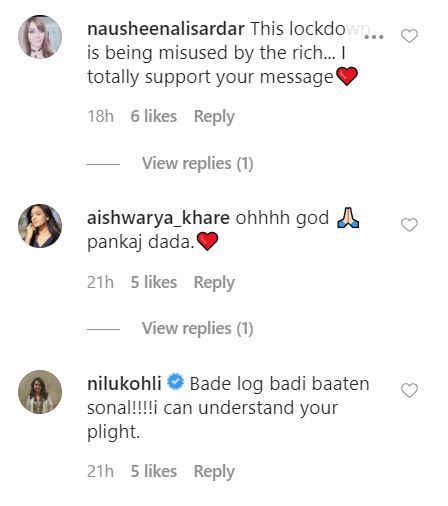 PEOPLE HAVE PLEDGED SO FAR
LATEST NEWS
View all
1 day ago
Gabrielle Union files complaint against NBC, 'America's Got Talent'
1 day ago
Asim Riaz, Divyanka Tripathi & Kratika Sengar roped in for Ekta Kapoor's 'Naagin 5'?
1 day ago
Aishwarya Sakhuja tags Mumbai Police and calls out an obscene message she got from a fan
1 day ago
TV's power couple Gurmeet Choudhary and Debina Bonnerjee share their daily workout regime
4 hours ago
Sumona Chakravarti of TKSS fame has worked in THESE shows over the years, See list