Taarak Mehta Ka Ooltah Chashmah stars recently met with each other via a video call. The four men from the fictional Gokul Dham society caught up with each other and Mandar Chandwadkar shared the picture on his social media account. Fans were delighted on seeing this post.

Actors Mandar Chandwadkar who plays the role of Bhide, Amit Bhatt or Baapuji, Tanmay Vakharia or Bagaa and the show's director Malav Rajda caught up with each other via video call. The four men are currently observing self-isolation and are staying indoors with their families. Hence to stay connected, the four men decided to video call each other and catch up on the latest happenings. The caption Mandar Chandwadkar wrote for the post mentioned that they are far, however, they are still together. 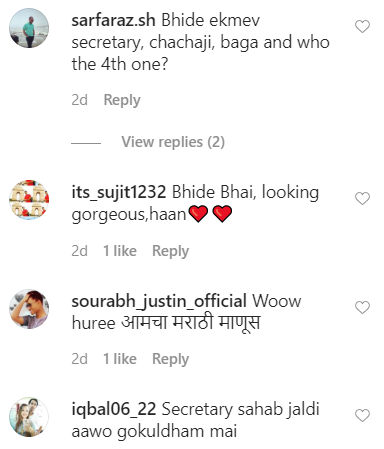 Taarak Mehta Ka Ooltah Chashmah cast is one of the most-loved ones of the television community. The show Taarak Mehta Ka Ooltah Chashmah has been running for eleven years and is one of the most popular shows. The cast members are loved by all and the light humour in the show often delivers joy to families all around India. Recently, due to the outbreak of the Coronavirus, several TV shows and film productions were halted. This was done in order to ensure safety and thus prevent the virus from spreading any further.

It was on March 17 when the shooting for Taarak Mehta Ka Ooltah Chashmah was halted. The producer of the show, Asit Modi, had shared the incident on Twitter and had mentioned that he was not being allowed to shoot any further scenes. The producer had requested officials to let him shoot until March 18. However, now, the entire cast and crew of the show have been in lockdown in their homes and all shootings have been halted.