Hina Khan's 'two Milestones At Work' Will Leave You In Splits, See Pic

Hina Khan, who is quite active on social media, once shared an Instagram story about the actor's daily milestones at work. Take a look at the meme shared by her

After Vikram Bhatt's Hacked, Hina Khan is now gearing up for her next titled Lines, by Hussain Khan. Ever since she made her debut in Bollywood, she has been turning heads with her glamorous style statements. The actor is very active on social media and keeps updating fans with her whereabouts. Once in an Instagram story, Hina Khan went on to reveal the two milestones she wants to accomplish when she is on a shoot daily.

During the time when Hina Khan was shooting for her film Hacked, the actor made sure to keep her fans updated with the daily happenings of her life. The actor shared a meme talking about two daily milestones she looks forward to accomplishing every day in her daily routine life. According to the meme, the two daily milestones she looks forward to accomplish are lunch and leaving. The actor made this fun remark during her Hacked shooting days.

Also Read| Is Hina Khan Back On TikTok? Here's All You Need To Know About 'Lines' Actor's Account 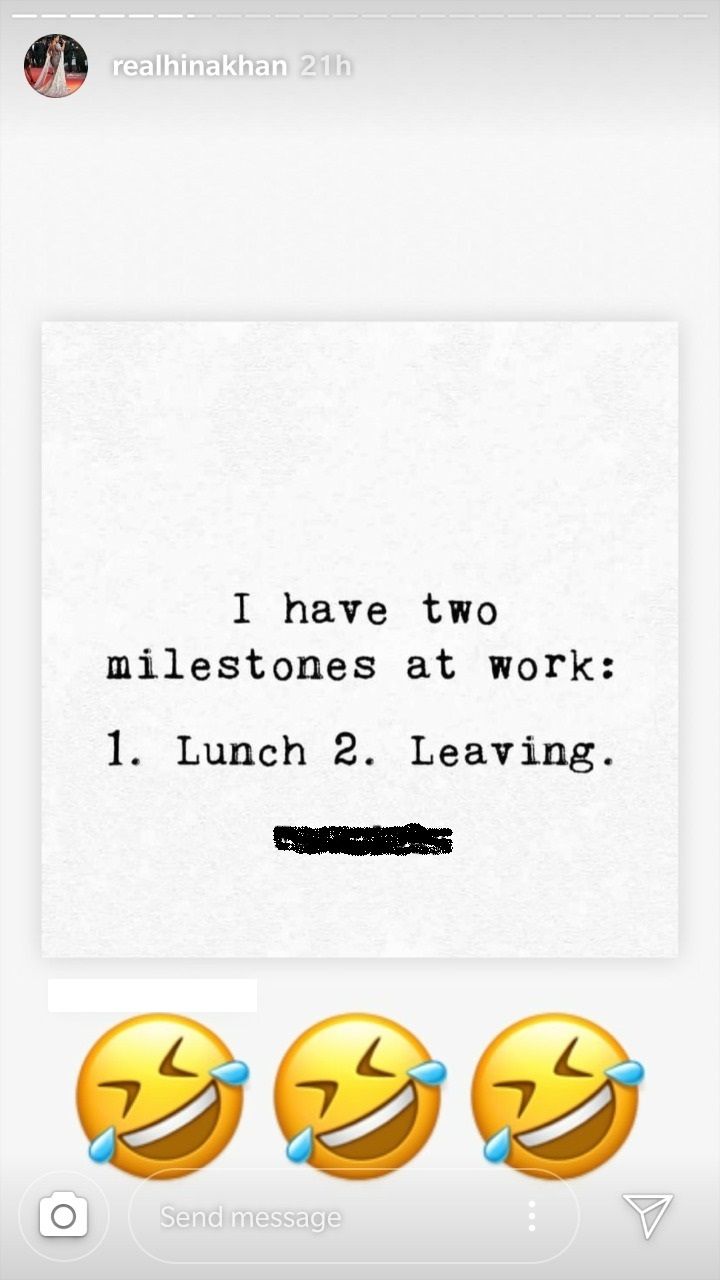 On the professional front, Hina Khan was last seen in Vikram Bhatt's Hacked that received a warm welcome at the box office. And now she is preparing for her next titled 'Lines', alongside Rishi Bhutani. As per reports, the film will trace the story of a Pakistani guy who falls in love with an Indian girl. The movie will be produced by Rahat Kazmi, Tariq Khan, Zeba Sajid and co-produced by Jayant Jaiswal's Hiro Faar Better films.

Hacked is directed by Vikram Bhatt and is set to hit the big screens on February 7, 2020. Hina Khan would be featured alongside Rohan Shah. Its story is mainly about a boy's love for an older girl and how it turns into an obsession. The movie did moderately well at the box office.

Also Read| From Hina Khan to Aamna Sharif, here's who made headlines for their style this week