Varun Sood is now the youngest gang leader in Roadies after replacing Raftaar. The reality show star took to Instagram to express his emotions. See post.

Varun Sood is now the youngest gang leader of Roadies Revolution as the reality star has replaced Raftaar in the show. He will now be heading a group of young participants in the reality show. Varun Sood took to Instagram to express how he feels.

Varun Sood is the youngest gang leader ever

Varun Sood shared a picture from the MTV Roadies set. He is seen walking into the filming area. In an interview with Bollywood Life, Varun Sood had shared that he is ecstatic about the appointment. He said that he is at an advantage during the show as he is a contestant turned gang leader. He feels that Roadies is like a family to him which helped him grow as a person. Varun Sood will be replacing Raftaar, who is leaving the show due to his music commitments.

Varun Sood took to Instagram to share how he feels after the big news. The gang leader's position is one of his best works so far. He took to Instagram to express how he feels. He wrote, “It’s a short walk, but it has been a long journey! (Dad @vineet.sood.7792 gave me my dadu’s pocket watch for my entry, and said he’ll be proud looking at you)#roadiesrevolution #gangvarun@rjdeigg bStyling: @forummmmm @mtvindia @mtvroadies.” He tagged his staff, the makers of the show for the opportunity.

Varun Sood’s picture received several reactions from his fellow Roadies as well as followers on social media. One fan wrote, “It surely has been a long journey for you. We all are so proud of you. Finally you got what you deserved. #GangVarunSood forever.” Another follower wrote, “Totally deserving #gangvarunsood sounds perfect. all the best.”

Check out several reactions by his followers on social media 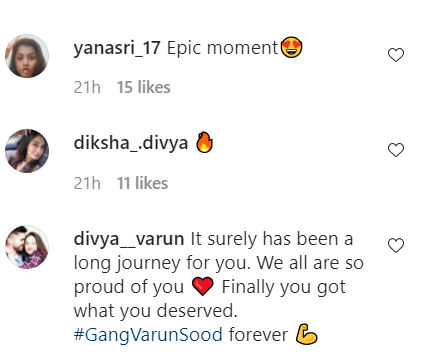 Varun Sood’s girlfriend and former MTV Splitsvilla contestant Divya Agarwal also congratulated her BF. She wrote, “Handsome”, in the comments section. The picture received thousands of likes and comments from his 1.2 million and counting followers.

Also Read | Did You Know Raftaar Wrote A Song For A Hollywood Film Starring Chris Pratt?

WE RECOMMEND
2 weeks ago
Did you know Raftaar wrote a song for a Hollywood film starring Chris Pratt?
3 weeks ago
Raftaar's journey from a participant in 'DID' to becoming a famous rapper is inspiring
3 weeks ago
Raftaar announces film with Nawazuddin Siddiqui; spills few details about the project
2 weeks ago
Exclusive: Maninder Buttar says he 'hopes to collaborate soon' with Yo Yo Honey Singh
1 week ago
Radhika Apte' various avatars on Netflix that won hearts; 'Ghoul', 'Raat Akeli Hai' & more