Yeh Rishta Kya Kehlata Hai’s Shivangi Joshi was an adorable munchkin as a kiddo and her latest pictures are proof of just that. Take a look at these pictures.

Yeh Rishta Kya Kehlata Hai actor Shivangi Joshi is one of the most popular names on Indian television. Be it her portrayal of Naira in the popular show or her chemistry with her co-star Mohsin Khan, fans cannot get enough of her. Recently, the actor shared some of her adorable childhood pictures which once again left her fan into a frenzy.

A baby Shivangi looks unrecognisable with her short hair and cute as a button in the throwback pictures. The first picture has the actor sporting an intense yet endearing expression. She can be seen donning a full-sleeved blue attire along with peach-colored dungarees. In another picture, Shivangi can be seen sitting with some of her friends sporting a tiny white full-sleeved top and printed blue pants.

The bottom-right picture has the actor giving out a pensive expression but nevertheless looking adorable at the same time. Shivangi also had a beautiful caption for the pictures. She wrote, 'If only I could tell this little one what the future holds for her.' Needless to say, her die-hard fans flooded the comment section with heaps of praises for her delightful baby pictures. One of her fans wrote in the comments section stating, 'Who knew that this little baby would be leading the television industry.'

Another fan wrote how the actor has had a blessed journey from being 'Dehradun's tom-boy' to 'Mumbai's princess'. The fan also added that the actor should keep inspiring her fans like this. Take a look at the post shared by the Yeh Rishta Kya Kehlata Hai actor along with the reaction of some fans to the same. 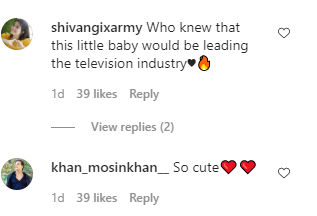 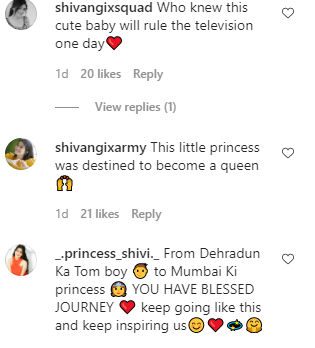 Meanwhile, Shivangi has been in the news not only for resuming the shoot for Yeh Rishta Kya Kehlata Hai but also due to her romantic music video with Mohsin titled Baarish. The love ballad speaks about the monsoons and the memories attached to it, from the eyes of an adorable couple in a long-distance relationship. The track has been composed by Payal Dev, who has also sung the female segment of the piece, while the rest has been sung by Stebin Ben.