The new Kristen Stewart-Mackenzie Davis holiday film 'Happiest Season' is all set to release on Hulu. Find out if they are dating in real life. 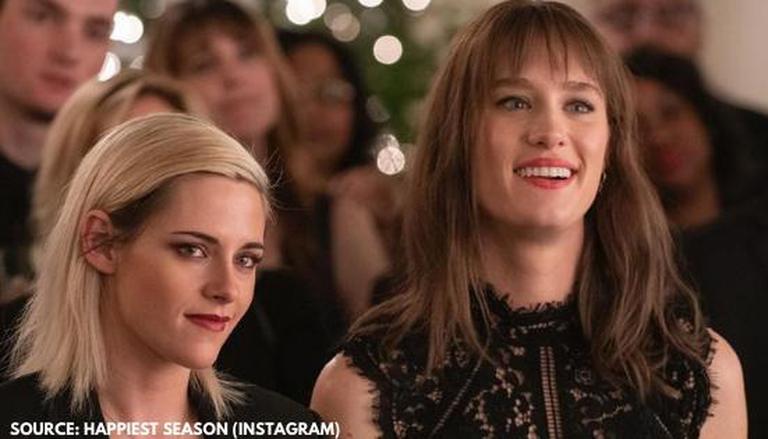 One of the most enjoyable things about the Holiday season is the delightful movies that make their way to the various streaming platforms. While most Holiday movies have a rehashed version of the same storyline, similar characters, some drama and a whole lot of love, Hulu’s Happiest Season is a tad bit different. This new Holiday movie does not narrate the comical and fairytale story of young and attractive heterosexual individuals, instead, Kristen Stewart and Mackenzie Davis play a young and attractive lesbian couple.

Read | Nick Jonas awaits release of 'Dash & Lily' on Netflix; shares a so

Hulu’s Happiest Season follows Abby, played by Kristen Stewart, a young and very much in love woman who plans on proposing to her partner Harper, played by Mackenzie Davis, at Harper’s family holiday party. However, like many planned proposals in Holiday movies, this one goes down the trash chute very fast, when Abby realises that her beloved girlfriend has yet to come out to her conservative family. In the trailer of this film, Harper says, “I am scared that if I tell them who I really am, I will lose them.” In another dialogue, Harper is heard saying in the trailer, through tears. “I am not hiding you, I am hiding me.” In an earlier interview given to People Magazine, the Twilight fame actor Kristen Stewart revealed that she had always wished to see a gay Christmas rom-com film. The 30-year-old actor revealed that she was very proud of the writer/director Clea DuVall for carving this story at this point in time.

Read | Country Ever After: Will there be a season 2 for the popular Netflix show?

While Mackenzie Davis’ partner in the film is Kristen Stewart, the ladies are not real-life partners. The 33-year-old Canadian actor, Mackenzie Davis is very private when it comes to her personal life. But a report in Distractify has revealed that she is reportedly dating a man by the name of Gus Thompson. The couple has been spotted together at various social events.

Kristen Stewart's girlfriend: Who is she dating?

Kristen Stewart is currently dating screenwriter and actress Dylan Meyer. While Kristen Stewart is not on Instagram herself, her partner Meyer has an account and often posts pictures featuring Kristen. Another report in Harper Bazaar revealed that the couple were first spotted together in August of 2019, but they had met several years prior to a movie set. Most recently Dylan has worked on the short Rock Bottom and the TV series Miss 2059.

Find me under the covers hiding from the happiness police. 🖤

I think I might chew my fingers off from nerves today but here’s a sweet photo @lindseybyrnes took. I really hope you vote. There are lots of crucial issues on your ballot besides the presidency and your voice truly does make a difference. The opportunity to have a say in the laws that govern you is precious, please don’t waste it.