Bollywood actor Bobby Deol treats his fans and followers with his throwback photos on different social media platforms. Recently, he took to Instagram and shared a series of pictures from his show Aashram. They feature the actor in Kashipur Wale Baba Nirala’s avatar from his MX Player web series on the photo-sharing platform. Here is everything to know about Bobby Deol’s recent post on Instagram.

Actor Bobby Deol took to Instagram and shared a carousel post through his official handle on October 15, 2020, Thursday. The photos feature him showing his looks of Kashipur Wale Baba Nirala from the crime-thriller web series, Aashram. In the pictures, Bobby Deol has donned an off-white printed kurta and has paired it with white pyjamas. He has accessorized chunky finger rings, bracelets, and a neckpiece to match with the outfit. Moreover, the actor has applied a yellow and red Teeka for a complete look.

The first throwback picture of Bobby Deol features him while sitting on a plastic chair on the set of Aashram. He has worn a pair of sleepers. The second one showcases the actor lying down on a comfy red couch.

In the caption accompanying his social media post, Deol asked whether viewers were waiting for the part 2 of Season 1. The actor wrote, “Waiting for Season 1, Part 2... aren’t we all... #Japnam! ðŸ™ðŸ» #ThrowbackThursday”. Check out his recent throwback photos on the photo-sharing platform:

Within an hour of sharing the social media post, Bobby Deol received more than 20, 400 likes, and over 605 comments on the photo-sharing platform. Numerous fans and followers of the star shared their response by replying in affirmative to his question. Many among them applauded the actor for his performance and revealed that they had been waiting for the second part to release in the comment section.

Meanwhile, others expressed themselves through a series of emoticons such as hearts, fire, heart-eyed smileys, kisses, hugs, claps, and folded-hands, to name a few. Check out some of the responses to Bobby Deol’s throwback photos on Instagram: 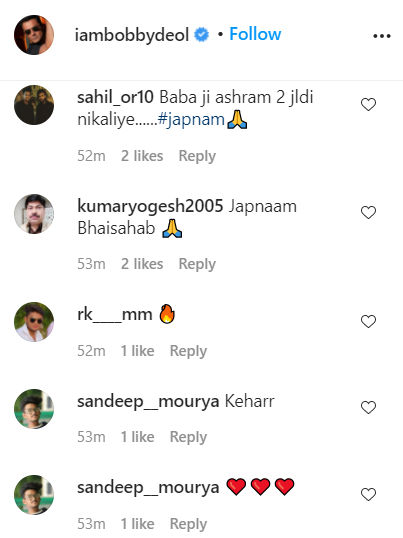