General Hospital fans have been worried about Peter August for some time now. In the past few episodes, the show hinted that the character might be leaving the show. Wes Ramsey who plays Peter on the show took to his Instagram on February 6, to express his gratitude to his fans and the showrunners.

The caption read, “There’s no greater sense of creative fulfilment than reaching the end of a truly epic week on set doing what you love, a big shout out to all the GH cast and crew. I’m inspired by and grateful for each and every one of you. Thank you for sharing in the adventure of this Port Charles journey.” Although the statement did not hint towards the actor’s departure from the show, many fans deemed that it was a goodbye message. Find out is Peter leaving General Hospital?

Many fans took to the comments section of the actor’s post and began speculating that this could be a potential goodbye message. As more and more people joined the comments section, wishing the actor good luck for his future endeavours, he edited his earlier caption to clarify somethings. He edited the original caption and added, “Based on a tidal wave of comments, I must now preface — this is not a farewell post. Just had a great week at the office,’ so thank you for all the kind and supportive words. GH has the best fans on the planet.” 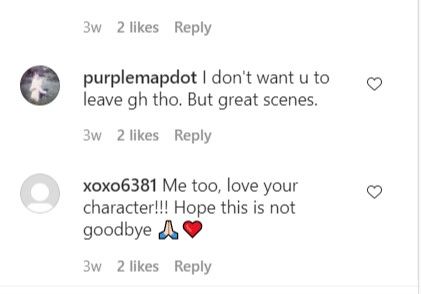 Hence, fans of Wes Ramsey and take a breath of relief because Peter August is not leaving General Hospital. The 43-year-old actor, Wes Ramsey joined the cast of General Hospital in November 2017 as the mysterious publisher who was soon revealed to be the son of Cesar Faison and Anna. Since then the antagonistic character, Peter has continued to spin one lie after another in the four years since he’s arrived in Port Charles. His schemes to cover up his lies become bolder and bolder as the seasons passed. Maxie seems to be the only person who still believes that her fiancé is a changed man, but she is in for a massive heartbreak.

Read | What happened to Jordan on 'General Hospital'? Is Brianna Nicole Henry replaced?

One thing to note is that General Hospital has consistently portrayed Peter as someone who’s kind to children. The writers always try to give Peter a sympathetic side and he genuinely seems to love Maxie. But that doesn’t mean Peter’s treating Maxie right, however, his soft side shows that he’s not a complete monster.

Read | Is Sonny leaving 'General Hospital'? Here's all you need to know about the mobster's fate