Actor Hwang In Yeop has shared a glimpse from his recording of the OST of his show 'True Beauty'. The show is coming to an end this month.

South Korean music and film industry has been gradually gaining a lot of popularity all over the world, with music bands such as BTS being one of the front runners in recent times. Another popular name in South Korean films is Hwang In Yeop, who has been popularly associated with the television show True Beauty. Even as the fans of this show prepare to bid the actors farewell with only the last few episodes remaining, Hwang has given a small glimpse of himself recording for the True Beauty OST – have a look.

With millions of people following the actor on Instagram, In Yeop has decided to tease his fans by sharing a small glimpse of himself in the recording studio. It was only recently revealed that he will be lending his voice for the OST of his show True Beauty. Now, the latest post by the actor has brought a lot of excitement to his fans, along with the fans of the show. In the caption of the post, the actor only added emoticons that symbolise a song and singing.

With a pen and paper in hand and headphones on his head, the actor seemed to be rather focused during the recording of the song. As expected, loyal fans of Hwang started commenting on the post right away, expressing their excitement about the song. The strong impact that the actor has made in True Beauty was visible in many of the comments, where fans were saying that they were proud of him for having played this role. 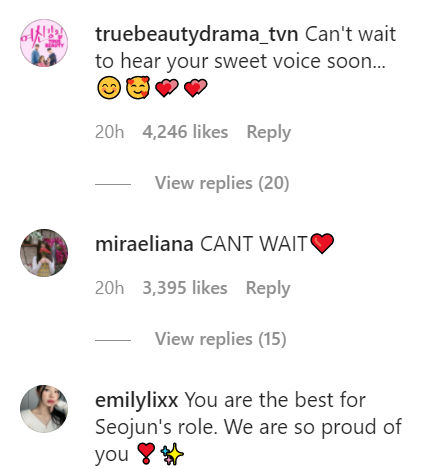 ALSO READ: 'True Beauty' Cast: A List Of The Actors And The Characters They Portray

Hwang In Yeop, along with his co-stars Moon Ga-young, Cha Eun-woo and Park Yoo-na, has portrayed the role of a young student in high school in the show. Even in its relatively shorter run, True Beauty has evidently earned a lot of popularity, especially among the younger audience. The plot of the show centres around the journey of a girl in high school who gets bullied and discriminated because of her looks and eventually brings a transformation in her looks.

ALSO READ: 'True Beauty': Here Are Some Of The Hilarious Scenes From The Fan-favourite K-drama