Kubbra Sait shared her work from home location and fans have loved the blissful picture that the actor posted. Read further ahead to see the picture.

Kubbra Sait seemed to have the most amazing time working from home as she welcomed the New Year with a spectacular view. The actor shared her workspace set up with her fans on social media. The serene view of the sea with the blue tones made her followers green in envy. In her caption as well, Kubbra mentioned that she has no complaints if she has to quarantine in that particular place as she works from home, jovially.

Kubbra Sait took to Instagram to post a picture where a majestic view of the ocean can be seen. Her laptop and plant that were kept on the table added an aesthetic feel to the photograph. A few chairs too were kept around in the picture and Kubbra mentioned that she welcomed the year 2021 while working from home.

In her caption, she further wrote that she is thankful for the sunshine and has no problems if she has to quarantine herself in that particular location. Kubbra Sait geotagged herself to be in Malta at the Westin Dragonara Resort. Fans and followers were quick to react to the image shared by the actor and expressed their envy as they glanced upon the marvellous view from the photograph. 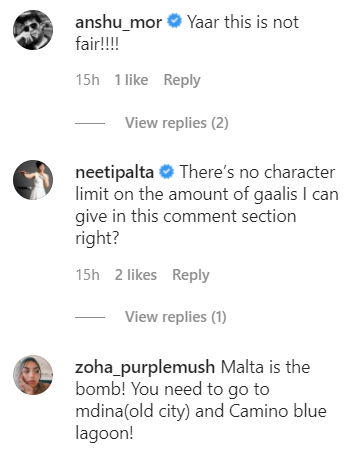 A follower wrote “this is not fair” as he saw the view Kubbra witnessed. Another follower commented jovially that she wishes to say a number of things to Kubbra as she herself was envious of the marvellous view the actor enjoyed. A number of fans too commented on the picture suggesting Kubbra to visit around Malta and to discover new locations as she is travelling.

The actor made sure to reply to most of the comments and thus had a good time with her fans and followers. She has been sharing a number of such amazing pictures from her travels which have been loved by fans. Another picture the actor took was during Christmas eve when she posed near a mountain that oversaw a small lake beneath it. Fans loved that picture as well and wrote several positive comments appreciating the click.