Rakul Preet and many other celebrities have provided further reviews of Anushka Sharma's 'Paatal Lok'. Read further ahead to know what the stars had to say.

Paatal Lok on Amazon Prime is being loved by many people and fans have been praising the show ever since its release. Several celebrities have especially praised the series and urged their fans to watch it. Rakul Preet Singh, along with many other stars, has also taken the time out to promote the film and urge her fans to watch it as soon as possible.

Rakul Preet Singh wrote a review of the series in which she called Paatal Lok simply outstanding. The actor evidently loved the series and was in complete awe of it. Further on, Rakul Preet Singh went on to point out that the storytelling, along with the narrative and performances, impressed her the most. The actor loved the way the series was shot and thus praised the cinematography of the film. In conclusion, Rakul Preet Singh simply added a big, ‘Watch It’ before she ended her post. Thus asking her fans to watch the series streaming on Amazon Prime. She also mentioned Anushka Sharma in the story and gave her a thumbs up for bringing this story to the world as a producer. 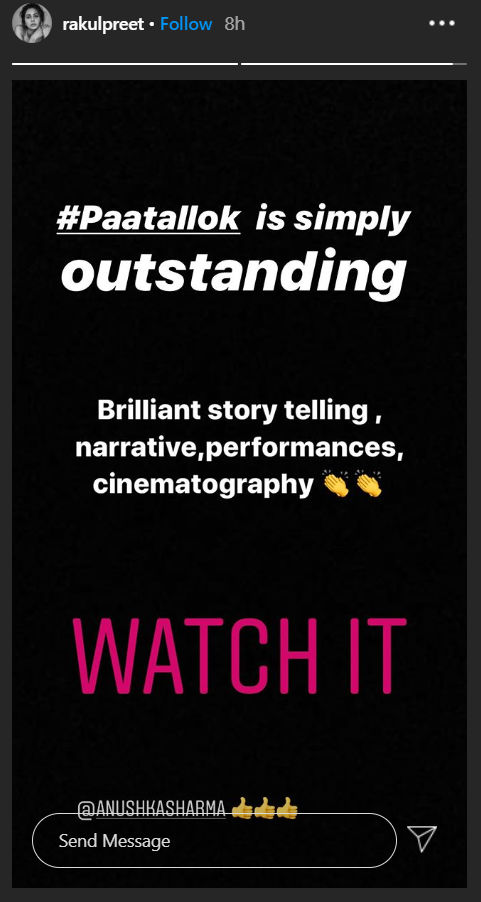 The star of Sairat, Ishaan Khatter too was taken by surprise by the grim crime drama which is Paatal Lok. The young actor shared his experience of watching the series and seemed quite impressed with it. Ishaan Khatter called the series engaging for its narrative. He also added that Paatal Lok is bingeable and perfectly crafted. The actor was very impressed with the show and thus went on to praise the cast of the film along with Anushka Sharma. He congratulated them and praised them for their amazing work on the series. Suniel Shetty too praised the film tremendously by writing a tweet directed towards Anushka Sharma. The actor specially mentioned Anushka and praised her for her work as a producer. Suniel Shetty mentioned that he was impressed and said “Hats off” to Anushka Sharma for backing such an impressive story. The actor seemed very pleased with the story and called the series a perfect amalgamation of content and talent. Closing in, Suniel Shetty gave out a mini spoiler by mentioning that he loved the way the makers integrated the concept of a man’s best friend into the story of Paatal Lok.

Special mention to @AnushkaSharma @OfficialCSFilms #KarenshSharma hats off for producing and backing such amazing content and talent. Loved the way you integrated the importance of man’s best friend (pet) in the narrative. #PatalLok ðŸ‘ðŸ‘â¤ï¸

PEOPLE HAVE PLEDGED SO FAR
LATEST NEWS
View all
7 hours ago
Jimmy Fallon apologises for blackface controversy, Jamie Foxx comes out in his support
1 day ago
Who is Steven Assanti's wife, Stephanie Assanti? How did the couple meet?
3 hours ago
Netflix purchases Hollywood's iconic Egyptian Theatre; check details
7 hours ago
Here is the net worth of the major actors of 'Space Force'; Check details here
14 hours ago
Netflix's new releases include 'Space Force', Anurag Kashyap’s 'Choke', and more