In July, Riverdale actor Vanessa Morgan took to her social media handle and announced her pregnancy. Amid all the good wishes, an Instagram user attempted to troll her as on June 19, it was revealed that Vanessa Morgan and Michael Kopech had filed for divorce. But her Riverdale co-star Madelaine Petsch jumped into Vanessa Morgan's Instagram comments to defend her.

Leaving a harsh comment on Vanessa Morgan's pregnancy announcement post, a user wrote, "Don't disrespect out pitcher like that". As soon as it caught the attention of Madelaine Petsch, she clapped back at the comment. While defending Vanessa, she wrote, "Honestly if I see one more comment like this, I’ll lose it." "Vanessa is a beautiful mother-to-be and the hate and disrespect I’m seeing on this post about her bringing a new life into this world is disgusting," she continued. Her befitting reply won hearts as it bagged more than 32k likes and is still counting. 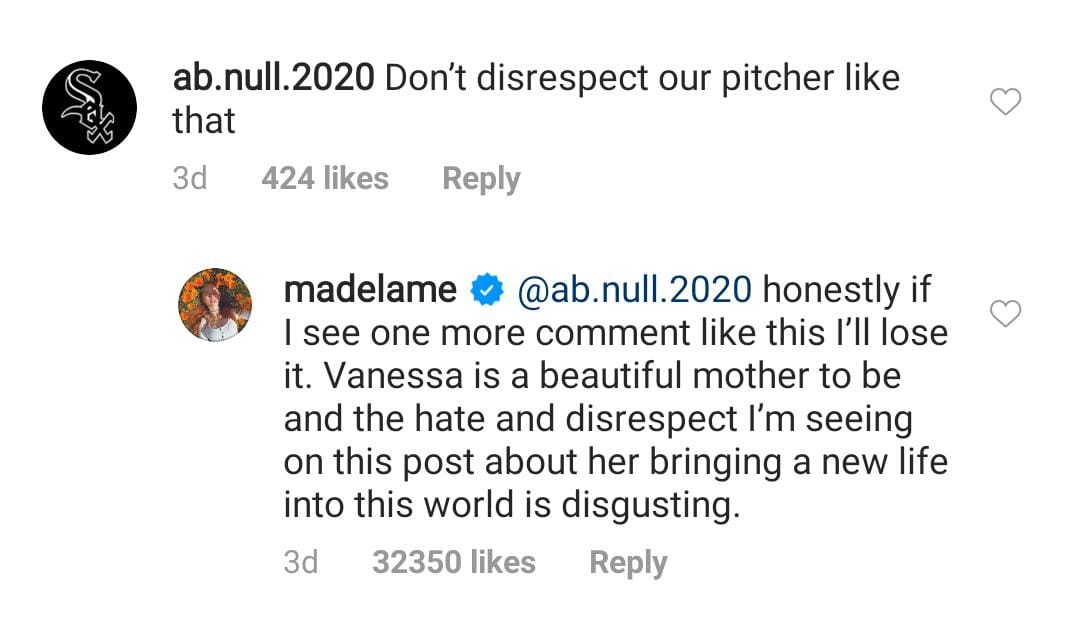 Talking about Vanessa Morgan's post, she shared a series of snaps on Instagram, while showcasing her gender reveal, a picture of her positive pregnancy test and also a picture from her first scan. Giving a brief caption to her post, the 28-year-old wrote, "Exciting news... I am overjoyed to be welcoming my baby boy into the world this January. This little guy has already brought me so much happiness and a feeling of such a greater purpose. I cannot wait to meet you!! On a personal note, I have had the blessing of growing up in the public eye having started my acting career at age 6. While this has been incredible for me, I am very much looking forward to giving this little guy some room to grow up outside of the public eye, until he tells me otherwise."

Vanessa Morgan and Michael Kopech started dating back in 2018 and took marriage vows in January 2019, in an intimate ceremony in front of close family and friends, including Vanessa's Riverdale co-stars. Later, earlier in June 2019, a leading news portal revealed that the couple had quietly filed for divorce. The Chicago White Sox player was not seen in any of the pictures of the pregnancy announcement post of Vanessa.

READ | Riverdale Quiz: Pick Outfits For Every Occasion To Know Which Character You Are

WE RECOMMEND
4 days ago
Lili Reinhart’s 'Chemical Hearts' trailer exposes catastrophic reality of teenage romance
2 weeks ago
Riverdale's KJ Apa and Sofia Carson roped in as leads in pandemic thriller 'Songbird'
3 weeks ago
KJ Apa looks completely different with a beard, fans have a mixed reaction to his new look
6 days ago
Vanessa Morgan's husband Michael Kopech files for divorce ahead of pregnancy announcement
1 month ago
Riverdale Quiz: Pick outfits for every occasion to know which character you are
LATEST NEWS
View all
8 hours ago
Is Sir Reginald Hargreeves an alien in 'The Umbrella Academy' Season 2?
6 hours ago
What did Five say in Greek in The Umbrella Academy Season 2? Here is what it means
7 hours ago
'The Alienist' Season 2 set was more intricate & detailed than it looks; check here