All new seasons of Sex and The City are set to release on television in 2021. Throwing some light on the same, the lead star of Sex and The City, Sarah Jessica Parker took to her Instagram handle and shared a promo clip of the series. Sharing the video on social media, the actor said, "I couldn’t help but wonder... where are they now? X, SJ". Take a look at Sarah Jessica Parker's Instagram post.

Sex and The City reprisal

The above-embedded promo clip begins with a glance at the busy streets of New York City. It also shares a glimpse of the buildings, bridges, and ports of the city. The small video also says, "And just like that... The story continues...". As seen in the caption, Sex and The City's new season will premier on HBO Max. Sharing the promo video on Instagram, Sarah Jessica Parker wrote, "I couldn’t help but wonder... where are they now? X, SJ @HBOMax @JustLikeThatMax #AndJustLikeThat #SATCNextChapter". Check out Sex and The City's promo video.

Fans and netizens went gaga over the announcement. One of the users commented, "OMG when will this be released!", while another added, "What the world needed rn!". Another fan added, "Shut up!!!!!! Omg the heavens have parted if this means what I think!!!". Another follower of Sarah commented, "this is the day I’ve been waiting for". Take a look at some more fans' reactions below. 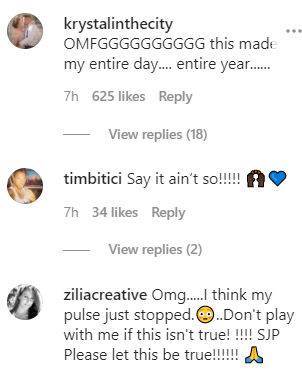 As mentioned in The Hollywood Reporter, Sex and The City's new season will feature ten episodes. Sex and The City cast Sarah Jessica Parker, Cynthia Nixon, and Kristin Davis will be seen reprising their roles of Carrie, Miranda, and Charlotte. However, Kim Cattrall who played Samantha will not be seen in the new series. The series' original creator, Darren Star also won't return to the team. Sex and The City's director Michael Patrick King will serve as the show's Executive Producer. No premiere date has been slated yet.