Margarita with a Straw actor Sayani Gupta took to Instagram on Tuesday, January 12, 2021, to share happy news about the much-acclaimed show Four More Shots season three going on floors. The actor went on to share a happy picture along with a sweet caption. On seeing this post, fans are sure to go all gaga over it as they have been waiting for this piece of news since quite a long time.

Taking to her Instagram stories, Sayani Gupta shared a picture with her co-star Maanvi Gagroo and director Joyeeta Patpatia. In the picture, the trio can be seen posing and are all smiles for the camera. Sayani can be seen donning a white and black striped top and completed the look with a simple hairdo, well-done brows, and minimal makeup. Maanvi can be seen wearing a printed top and opted for a middle parting hairdo, well-done brows and no makeup, while Joyeeta, on the other hand, can be seen sporting a white sheer top and opted for natural makeup.

Along with the picture, the actor also went on to leave a sweet caption revealing details about the same. She wrote, “To new beginnings!” and also went on to tag the rest in the pic. Take a look at the post below. 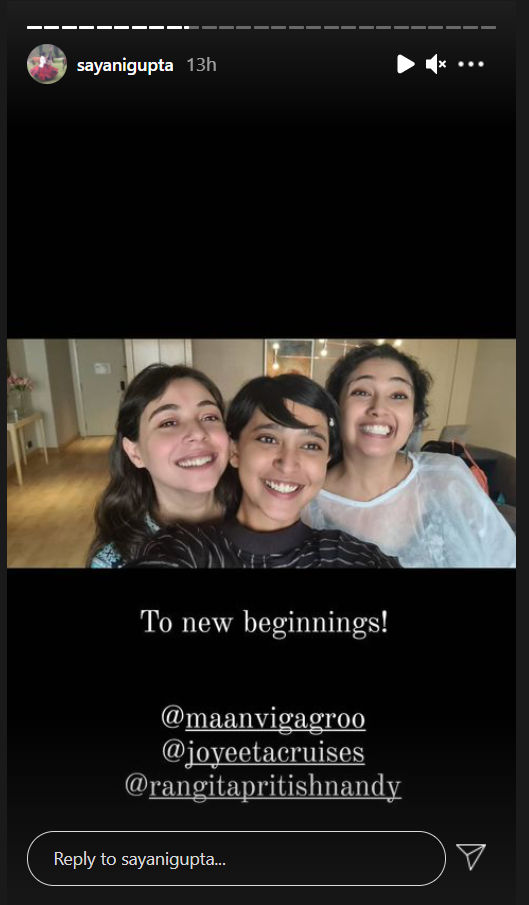 Apart from this picture, the actor often goes on to share several pictures, videos, stories and more giving fans a glimpse of her life through her social media handle. Earlier to this post, the actor went on to share a picture of her where she looks all glamorous. In the picture, the actor can be seen donning a black and white co-ord set. She completed her look with silver jewellery pieces and opted for a wet hairdo, well-done brows, blush pink highlighter and pink lips. Take a look at the post below.

Four More Shots Please appeared on Amazon Prime on April 17 and received a thunderous response from fans as it highlights controversial issues such as bisexuality, single motherhood and women empowerment. Starring Sayani Gupta, Maanvi Gagroo, Kirti Kulhari and Bani J in the leading roles, the series follows the lives of four female friends from different walks of life, dealing with work-life conflicts, romance, ambitions and anxieties in modern-day India.