Actor Sidharth Malhotra recently took to his social media story to praise the performance of Kiara Advani in Netflix's original film 'Guilty' and review it.

Bollywood actor Kiara Advani's recent release, Guilty on the OTT platform Netflix, is being lauded by the critics and the audience alike. Apart from them, Kiara Advani has also received praises from many Bollywood celebrities. Sidharth Malhotra too joined the list and reviewed the performance of Kiara Advani and makers of Guilty.

Recently, Sidharth Malhotra took to his Instagram to appreciate the makers of Netflix's original Guilty. Sidharth Malhotra shared a picture of the film playing on his TV. He also tagged lead actor Kiara Advani, director Ruchi Narain, producers Apoorva Mehta and Dharma Productions in the story. The caption of the story picture read, 'Hard Hitting!'. 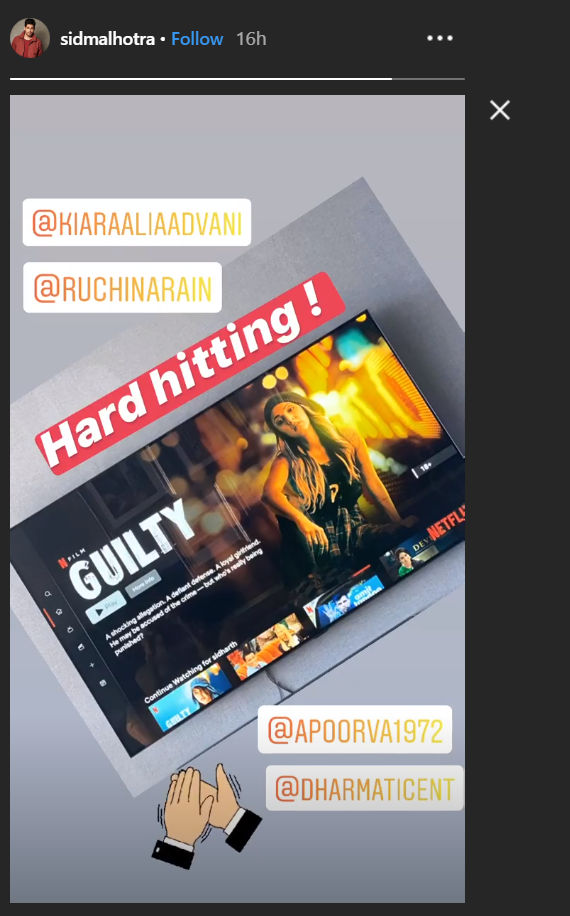 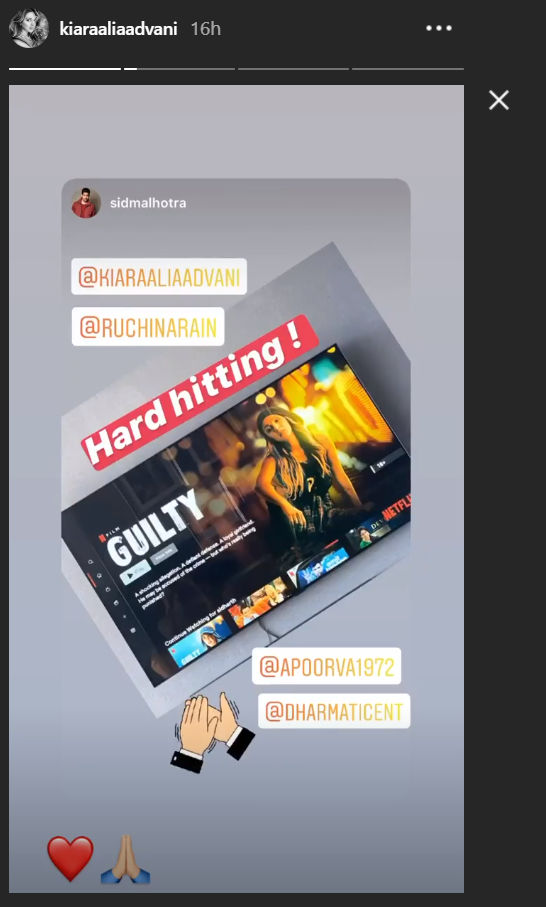 READ | Did Kiara Advani & Sidharth Malhotra Take Their Relationship To The Next Level?

All about Netflix's Guilty

Guilty has been directed by Ruchi Narain. The story of Guilty is about a college band and the friendship among them. Their life turns upside down when a young woman from small-town accuses one of the members of the band of sexual assault. The film takes the audience on a roller coaster ride of adventure when the police start investigating the case. The film started streaming on Netflix from March 6, 2020.

On the work front, Sidharth Malhotra and Kiara Advani will soon share the screen space in an upcoming Bollywood film. The film titled Shershaah will mark the Tamil filmmaker Vishu Varadhan's directorial debut in Bollywood. Shershaah will be bankrolled by Karan Johar's Dharma Productions and is scheduled to hit theatres on July 3, 2020. The film unfolds the story of Kargil war hero Param Vir Chakra Captain Vikram Batra, who sacrificed his life for the country in 1999.

PEOPLE HAVE PLEDGED SO FAR
Sacred Games' Jojo and Bunty catch up over a video call amid the COVID-19 lockdown
Bani J opens up on shooting 'Four More Shots Please' final scene after losing her mother
Astartes part 5 | Here is what you need to know about the last part of the film
'Money Heist' Season 4: Is Tokyo (Ursula Corbero) the only one left alive in the end?
Latest web series trailers that released in the past week | WATCH
DO NOT MISS
5 MEN ARRESTED FOR BEATING ENGINEER
ICMR REVISES COVID-19 TESTING
SACHIN PILOT ON COVID-19 FIGHT
DELHI CM ON OPERATION SHIELD
MADAN LAL REJECTS INDIA-PAK SERIES
PRASOON JOSHI ON 'MASAKALI 2.0' ROW