Varun Dhawan and Rajkummar Rao took to their Instagram handles to post reviews of Paatal Lok series. Read further ahead to know more about it.

Paatal Lok has been creating a tremendous buzz on the Internet since its release on Amazon Prime. The show has become a fan favourite and even celebrities have left no stone unturned in praising it. From Varun Dhawan to Rajkummar Rao, many celebrities have praised the series for its amazing work.

Varun Dhawan posted a story on his Instagram page praising the amazing show. Varun wrote in his story that he found the show to be superb. The actor even praised the performances of the actors. He, later on, went to tag Anushka Sharma who is the producer of the show. Similarly, Rajkummar Rao, along with several other celebrities, too praised the show. 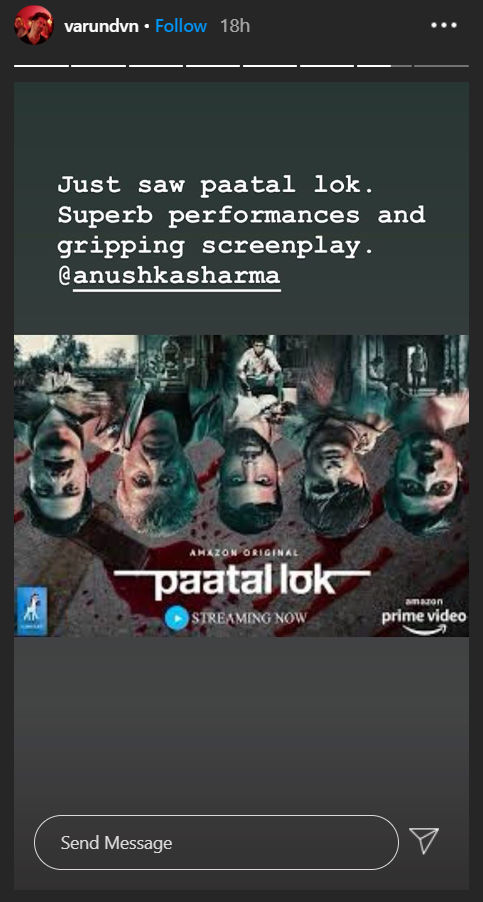 Rajkummar Rao particularly wrote a long and heartfelt message of appreciation in his Instagram story congratulating and praising the cast of Paatal Lok. He started off by mentioning that Paatal Lok is a must-watch series according to him. Later on, Rajkummar Rao went on to praise Jaideep Ahlawat for his amazing performance as police officer Hathiram. Rajkummar even added that after watching his performance, he believes that Jaideep deserves all the best actor awards. Later on, Rajkummar Rao praised Abhishek Banerjee for his marvellous role as Hathoda Tyagi.

Rajkummar mentioned that his role wasn’t an easy one, despite this he played the role brilliantly. Continuing with the praise, the actor praised Swastika Mukherjee for her performance as well and mentioned that he wishes to see more of her onscreen. Closing in, Rajkummar pointed out that the entire cast and crew of Paatal Lok is brilliant and phenomenal. Rajkummar then addressed Prosit Roy and mentioned that he has been an admirer of his work since Pari and mentioned that with Paatal Lok, he has taken his craft to the next level. Rajkummar Rao in conclusion finally praised the team and congratulated them for providing the world with such good content. 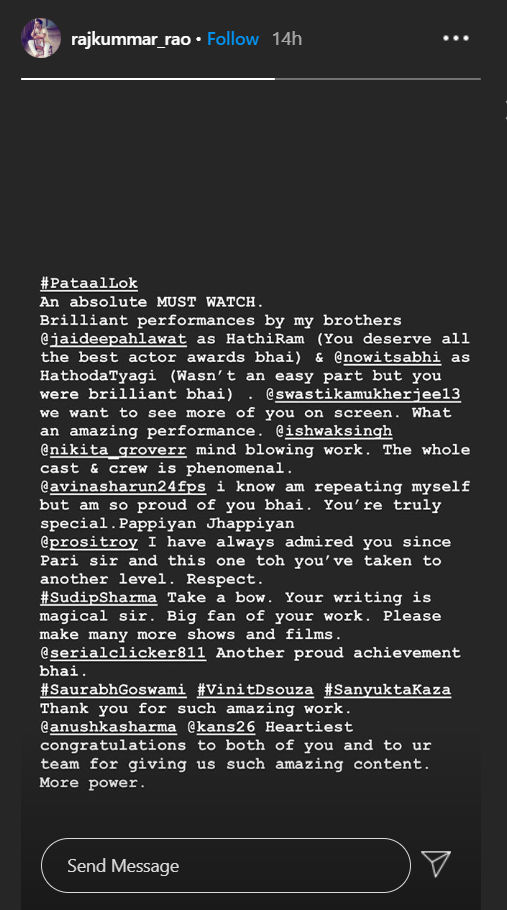 Some of the stars had joined in for a special cryptic Twitter thread to announce the launch of Paatal Lok. This effort of a launch event was loved by fans as it was unique, the cryptic message was well received by the fans and they enjoyed it very much. The cryptic message through the Twitter thread provided insight into what was in store for Paatal Lok before its release.

PEOPLE HAVE PLEDGED SO FAR
LATEST NEWS
View all
16 hours ago
Mona Singh dismisses rumours about her fallout with producer Ekta Kapoor; Read more
16 hours ago
'Chintu Ka Birthday' cast: Is the Vinay Pathak film worth watching? Read here
19 hours ago
Sushmita Sen starrer 'Aarya' trailer lauded by fans as they say, 'eagerly waiting for it'
15 hours ago
If '13 Reasons Why' is remade in India, will Alia Bhatt as Hannah Baker be convincing?
14 hours ago
Sushmita Sen says 'Aarya' represents vulnerability in a world run by men