Amitabh Bachchan and Sujoy Ghosh’s ‘What is Tenet?’ conversation has all the attention of the netizens. Read the hilarious conversation that no one understood.

Veteran actor Amitabh Bachchan and popular filmmaker Sujoy Ghosh got into a long conversation with each other through Twitter. Their conversation was so uncanny that netizens did not know what is happening. While Amitabh Bachchan is clueless about what exactly Tenet is, Sujoy Ghosh and netizens likewise made it a task to clear the actor’s doubt. The result of this is unique as per many comments

Amitabh Bachchan is clueless about Tenet film asks, 'What is Tenet?'

It all started after both Tenet and Gulaboo Sitabo are set to release soon. Director Sujoy Ghosh took to Twitter to say that he has watched Tenet's trailer and Gulaboo Sitabo's trailer is next in his watching list during the lockdown. Gulaboo Sitaabo happens to be Amitabh Bachchan’s next film which is skipping the big screen release due to the lockdown. However, the actor is not familiar with Tenet which is a sci-fi thriller yet to release. The trailer of the film released recently and it was well-received by the audience. Gulaboo Sitabo cast members too announced their trailer launch though a unique video conference. Sujoy Ghosh took to twitter to talk about the release of trailers of two interesting films.

However, Amitabh Bachchan’s reaction to Sujoy’s post was beyond the expectations of fans. Amitabh Bachchan asked, “What is Tenet?” to the director on his tweet itself. The director did not explain the meaning and wrote, “films we are eagerly waiting for.. but not being shown before official release.” Amitabh Bachchan replied by saying, “but mera bhi TENET hai ... i have not been shown final movie.” Netizens couldn’t really understand what is happening in the conversation. One social media user wrote, “This is one weird conversation.”

Here is the viral, “What is Tenet?” conversation for the uninitiated 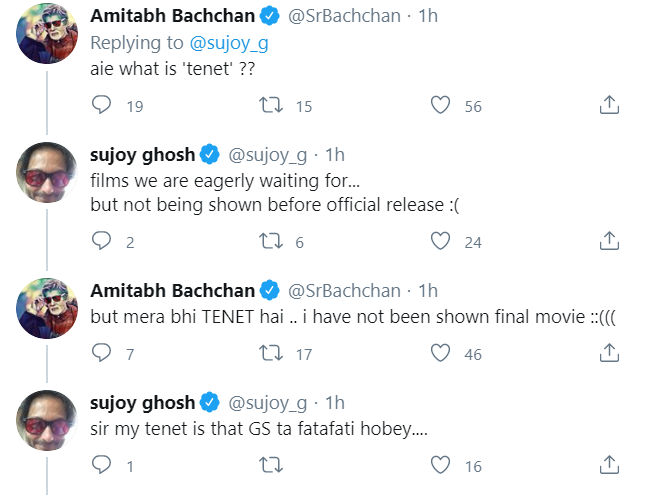 Netizens react to the conversation

This is one weird conversation.

For anyone who is unfamiliar with the film, Tenet is a Christopher Nolan creation, which is yet to release. Bollywood actor Dimple Kapadia is also one of the cast members of the film. What intrigued the audience is the trailer which has no release date in it. Amitabh Bachchan's Gulaboo Sitabo is releasing on Amazon Prime. The film also stars Ayushmann Khurrana in the lead role. As per reports, Gulaboo Sitabo's trailer is coming out on May 22, 2020. The film is helmed by Shoojit Sircar.