In the latest addition to the viral video showcasing a foodie bride, she can be seen enjoying a bowl of noodles while getting ready at a parlour. 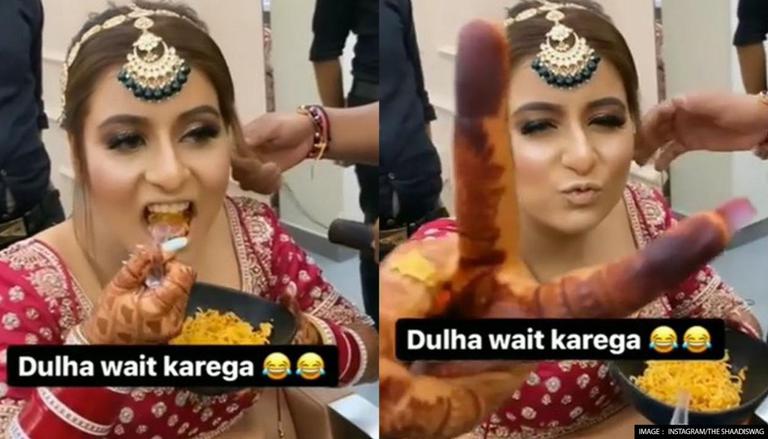 
A wedding is one of those occasions where everyone ensures that their dress is nothing but elegant and impressive. Brides all over the world do try to make it ‘extra special’. Though the day is considered hectic for both bride and groom, one bride refused to go through the hassles of her wedding without having a bowl of noodles. In the latest addition to the viral videos of weddings, this one showcases a foodie bride. She is seen enjoying a bowl of noodles while getting ready. The video shows a bride wearing denim jeans and a red colour blouse getting ready, holding a bowl of noodles.

In the meantime, probably her friend asks the bride, kya lag rahi hai? She replied: "Bhook lag rahi hai. Dulha wait karega (Feeling hungry. Let the dulha wait). Subsequently, her friend asks the bride about the time she needs to finish the noodles, she replied: 1 hour lagega (It will take around one hour). At last, her friend can be heard saying "Baarat aane wali hai (The groom's procession is about to arrive). Meanwhile, the video showcasing the bride in a joyful mood has garnered thousands of attention. Since being shared with the caption Let the dulha wait !! Tag a foodie bride-to-be" has garnered over thirty thousand views and a hundred witty comments. One such tagged her friend on Instagram that reads, "Tmhra future madam @b_lin_k__"

A video has surfaced on social media in which a bride is talking about pre-wedding dieting. While the bride is getting ready for her big day, she talked about how she was not able to eat since the day before due to the pre-wedding ritual. In the video, she revealed that she has lost five kilograms for the wedding and she now planning to eat after the wedding ceremony is over. The video has struck a chord with netizens who took to the comments section to express their reactions to the funny clip.

READ | Bride to file case against wedding venue for £150,000 after slipping on spilled drinks

Bride's plans of eating food after the wedding

A video shared by witty_wedding on Instagram shows a person attaching her hair with her wedding attire while she is talking about her dieting. In the video, she admits that she plans to eat after the wedding rituals are over. In the video, the bride revealed that she could not get a chance to eat during the pre-wedding function a day before. She added that she got a chance to eat in the evening but ate very little food as she did not feel hungry. She later says she did not even have her breakfast, not even tea and that after the wedding ceremony is over, she will tell her husband to hand over the food plate.