Car With 'mountain' Of Bikes On Roof Causes Stir On Internet, Leaves Netizens In Splits

In a one-of-a-kind sighting in Australia, a car's dashcam captured another four-wheeler that was carrying a 'mountain' of bikes on its roof

In a one-of-a-kind sighting in Australia, a car's dashcam captured another four-wheeler that was carrying a 'mountain' of bikes on its roof and is now being called as the 'installation art piece' by internet users. As per the social media posts, the footage is from Australia Eastern Creek, New South Wales. The screengrab from the video was posted on the Facebook page of 'Dash Cam Owners Australia with the image being a part of Dash Cam Owners Australia's 'She'll Be right mate', album. The caption, along with the image that was shared last week said, “Getting all the kids bikes in the car for the Holiday season is becoming a challenge.”

The image has already garnered thousands of likes and comments on the social media website, with netizens posting their takes on the 'hilarious' picture. While one of the netizens imagined what the conversation between that car’s driver and the police would be, another lauded the courage of the driver to make 'fool of themselves' on the roads. One internet user said, "I want to see the conversation this young driver has with the constable. I was challenged by my mates to see how many I could stack on my car". Take a look:

Several Facebook users were also seen amazed by image and wondered if it was real or photoshop. However, many made fun of the car and the drivers and wrote, "So does the car contain the same amount of clowns?". Another user said, "Is it real or photoshopped? I don't care if it is an old photo or not, just is it real?" One of them even called it, "Has to be an installation art piece surely!" However, one of the internet users had a message for the dashcam driver, "To the dashcam driver, first of all you really want to sit behind that? Secondly, have you heard of a safe stopping distance? At 79kms, its a hell of a lot further back then 1.5 car lengths!". 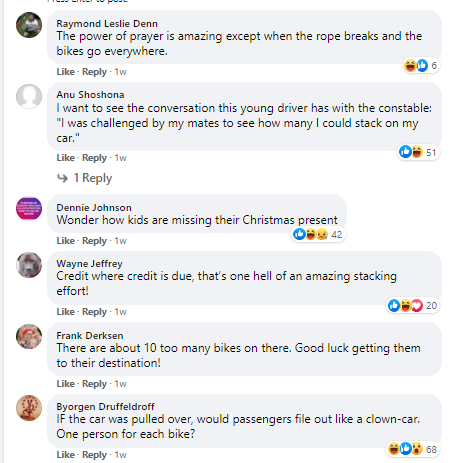