Netizens on Twitter have been reeling over the brand new "Buss It" challenge but Canadian actor Cassie Steele has taken it to a whole another level. Find out.

In recent days the 'Buss it' challenge has been going viral on social media and netizens have been enjoying it thoroughly. Many people from the African American community have now created their rendition of the Buss it challenge videos. Slowly the challenge is spreading across the world with women across all countries joining it. In the videos, women are seen dancing and twerking to Erica Bank’s viral 2020 song Buss it.

In the video, the 31-year-old Steele starts off dancing in a baggy shirt with her hair in a towel. However, before she drops it low her outfit transforms into a long-sleeved sky blue crop top and low rise jeans that reveal a peek at a bright blue thong. The risqué attire was a throwback to an episode in season 3 of the hit Canadian series, during which Manny (Steele) went to school wearing a visible thong to gain attention from her male classmates. She also created a full circle moment by captioning it, "For everyone who enjoys a good throwback outfit! #mannysantos #ugotthelook #bussitchallenge," she captioned the video on Instagram.

The 34-year-old singer who famously also starred in the high school drama as Jimmy Brooks commented on Steele’s video writing, “Fit is museum-worthy tbh Santos". To this Steele jokingly commented saying, “They'll probably put it beside the ruby slippers”. Before Drake rose to international fame and became a Grammy-winning artist he starred in the teen coming-of-age show for 100 episodes as Jimmy, a hotshot basketball player/amateur hip hop artist paralyzed from the waist down after a school shooting. The hit series was on air for 14 seasons between 2001 to 2015. The story revolved around the life of Degrassi Community School as the students are grappled in relationship issues, friendship fights and drugs. 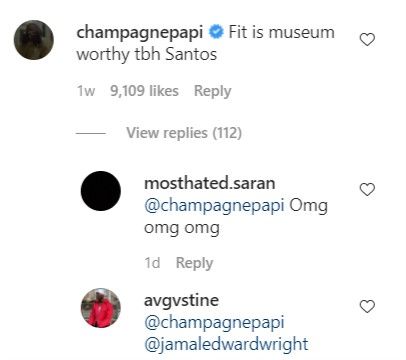