Cat Bonks Head Of Companion Feline As A Warning, Netizens In Splits

Footage depicts a grey and a brown-furred feline declaring conflict with body language as two animals threaten each other with postures such as a tail wag.

An adorable footage of two felines picking a fight in which one of the cats bonks on the head of its companion as a slight warning before declaring a full-fledged battle has triggered laughter on the internet. Shared on Reddit under the subred CatTaps, the 9-second footage depicts a grey and a brown-furred feline declaring a conflict with their body language as the two animals threaten each other with postures such as a tail wag and yowl in the cute video. Captioned as “Warning bonk before the battle,” the clip portrays cute altercation between the two pet cats living together at home.

As the clip begins, a brown-furred kitten can be seen grouchy and confused as the other cat, larger in size and grey in colour, stands still. The two animals engage in gestures as if to say the bigger cat trying to trigger some warning to the smaller one to steer clear out of its territory. Further in the clip, the larger cat can be seen laying on the floor, with its gaze fixated on its feline companion. All the while it wags its tail as it whips the head and attempts to give a warning nip to its colleague. However, the cat then manages to bonk on top of the smaller cat’s head before eventually grabbing it by the neck and portraying the defensive aggression.

Warning bonk before battle from CatTaps

“Touch gloves. Now fight!” joked a user. “It's crazy, it's exactly what two of my cats do every time they play together,” wrote another. “That’s a jab,” said the third. “I was just thinking about how Joe Rogan would take 5 minutes out of the podcast to break down how the cat was measuring his distance with the tap and how he definitely won it from the guard,” joked the fourth. Internet was intrigued by the agility of the larger cat in sending out a “cute” warning to his feline fellow. 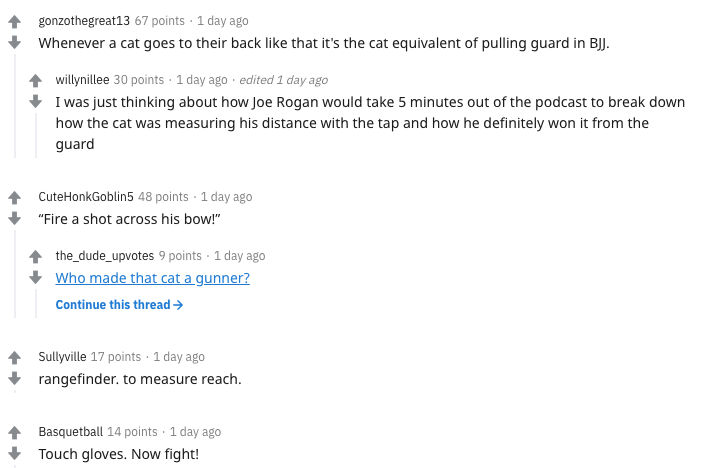