A hilarious video of a cat on Reddit is making netizens laugh out loud. The amusing video shows a cat trying to scratch the back of its head.

A hilarious video of a cat on Reddit is making netizens laugh out loud. The amusing video shows a cat trying to scratch the back of its head, however, is unable to perform the task. The video has created a buzz on social media leaving netizens in splits.

This video was shared on the subreddit ‘aww’. It shows a patterned cat trying to scratch the back of its head. However, it is unable to scratch the head. This is because the kitty has positioned himself in such a way that his paw doesn’t touch that spot where he is trying to scratch, even though, it reaches behind his head. The cat, unable to perform the task accurately, gives funny reactions. The person making the video can be heard laughing in the background.

The cat however kept trying and shaking its abdomen to scratch his head and even moved his head back to itch itself. But it was unable to position itself in the right manner. The facial expressions that he gave when he figured out that it cannot perform the task were so hilarious that netizens laughed out loud.

I think my cat is broken. Can someone teach him... from aww

The video was captioned, “I think my cat is broken. Can someone teach him...”. It has garnered over 13,500 upvotes and almost 200 comments. One Reddit user said, “Just needs an alignment”. While another said, “He’s just following rules — don’t touch your face while covid19 scours the earth”. While others tried to give the scientific reason for the cat unable to scratch his head. One user said, “Have you tried turning him off and on again”? While another said, “Just reboot it, he will fine afterwards”. Other users commented on the beauty of the cat. One user said, “That’s the prettiest housecat I’ve ever seen! Still looking majestic even though he can’t get a grip.” One Reddit user said, “He looks like a mini tiger." 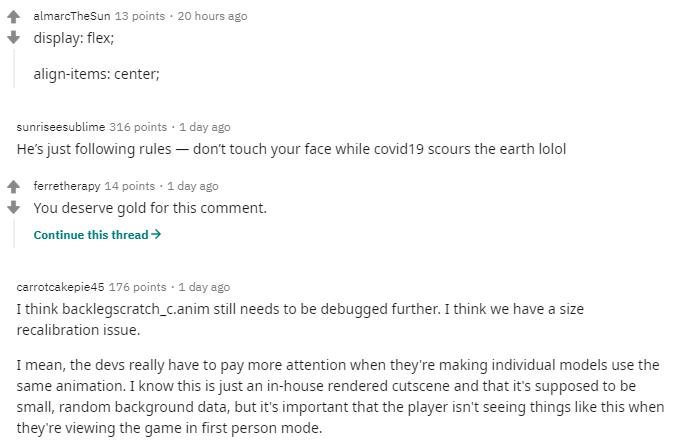 PEOPLE HAVE PLEDGED SO FAR
LATEST NEWS
View all
7 hours ago
Good news: five positive stories to cheer up the mood amid pandemic crisis
7 hours ago
Video of people dancing in their squares while maintaining social distance breaks internet
7 hours ago
Indore police surprise a one-year-old girl with a birthday cake amid lockdown; read here
10 hours ago
Grandma drags a cobra and tosses it away into the wild; watch
11 hours ago
These elon musk memes are not as hard to understand as his baby's 'changed' name; check