COVID-19: This Owner And His Cat Behave Like Any Other Housemates Amid Lockdown

Amid COVID-19 lockdown, a user shared a video on social media where this cat-human interaction is winning the hearts of the netizens on the Internet.

Sharing a living space with anyone is not easy and if it is a furry friend then it's more difficult. A user shared a video on social media where his feline, in particular, is having some differences with its human roommate who clearly doesn’t understand the importance of natural lighting and they have certain conflicts of opinions. Now the point is who emerges as a winner at the end. The video has created a buzz on social media and the netizens can't keep calm and are praising the attitude of the cat.

The almost 25-second-long video was posted on Reddit on March 25. Captioned ‘day 10’, the clip is now making netizens go ‘aww’. It shows a passive-aggressive interaction between a human and his cat about the positioning of the window blinds. In the beginning, we see the kitty sitting on top of a sofa starring out of the window; probably thinking of the day its human would be back at work so she could finally have some me-time again. When suddenly, the man in the video stretches his arm, from where he is sitting, to close the blinds. The feline is obviously shocked at this man’s audacity and does a full-turn with a clear ‘did you see what he just did?’ look.

Read: Anushka Sharma Is An Animal Lover And These Pictures Are Proof

Soon the cat regains its cool and simply opens the blinds again. As the man tries to close them again, a tug-of-war of sorts begins between the two. However, this cat is too classy to be playing such childish games. Towards the end of the video, you see that the feline has really had enough and opens not only the blinds of the window it is sitting in front of but also the one next to it. Take that human! The post currently has over 3,500 upvotes and almost 50 comments. 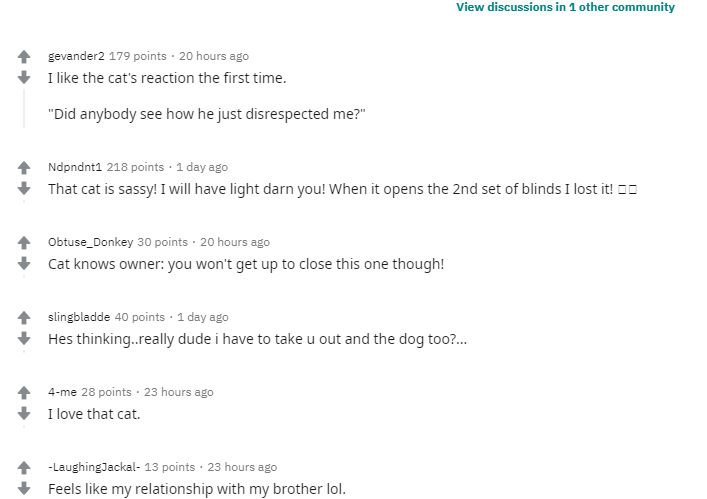 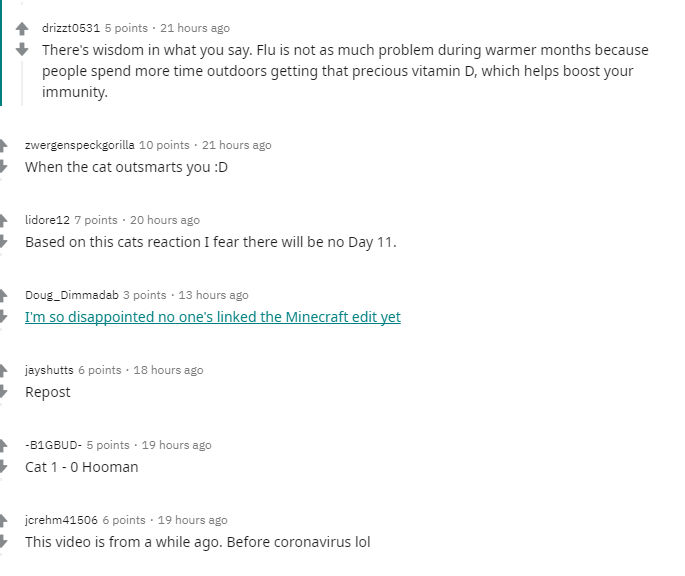 “I love that cat”

Reddit users had witty responses to the video. One tried to guess how the cat must be feeling when commenting, “did anybody see how he just disrespected me”? Another joined in the trend, writing “he’s thinking…really dude I have to take you out and the dog too”. People had an overwhelmingly positive reaction to the kitty. One Reddit user wrote, “I love that cat”. While another said, “that cat is fresh”.

“Based on this cat's reaction I fear there will be no Day 11”, read one comment. Well, we’d think twice too before messing with such a savage cat. Plus, daylight is anyway good for health. So keep those blinds open or basically do whatever your four-legged friend says because you saw its face, right? We worry what about happen if you didn’t.