Deepfake video featuring tech billionaires, Jeff Bezos and Elon Musk is doing rounds of the internet. The video which was shared by YouTube channel The Faking.

Deepfake video featuring tech billionaires, Jeff Bezos and Elon Musk is doing rounds of the internet. The video which was shared by YouTube channel The Faking on the video streaming platform has received nearly four thousand likes till now. The video features both Bezos and Musk in the pilot episode of the original Star Trek series The Pilot.

The video shows Bezos imposed on a body of one of the bulbous-headed alien race the Talosians while Musk plays the human captain Pike. The two are then seen talking about technology and human captivity. The Amazon CEO previously made a cameo appearance in 2016’s Star Trek Beyond as the big-headed alien. Watch the video here:

The video was posted along with a caption that read, "In the not too distant future Elon Musk will save us from the captivity of Jeff Bezos' Amazon illusion." Soon after it's release, it garnered all sorts of comments from netizens. Many users lauded the skills of the creators while others wondered if Mark Zuckerberg would have made a better alien. One user wrote, "The future is weird, they won't know what was the original version anymore, it'll be just an endless sea of very credible copies and alternatives" while another wrote, "Should have gotten Mark Zuckerberg for the alien. He has the whole... otherworldly look down easy."  Read what people had to say: 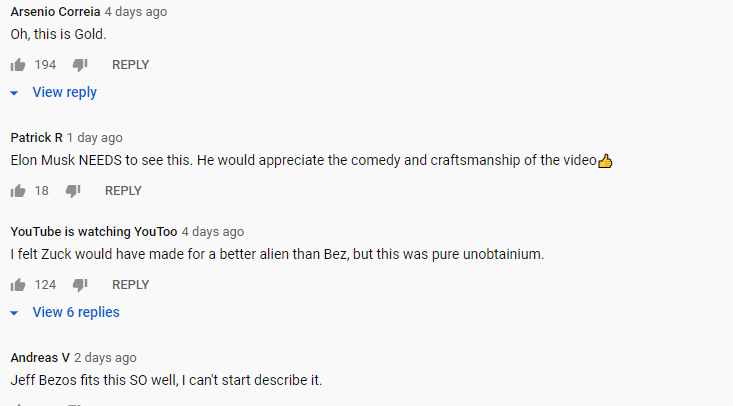 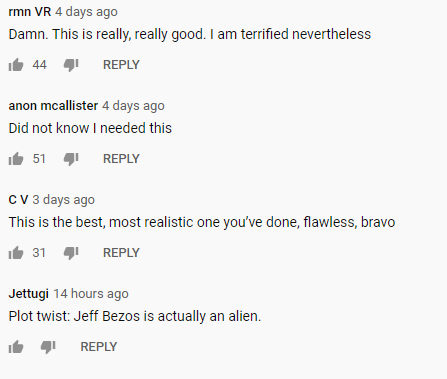 Deepfakes are synthetic media in which a person in an existing image or video is replaced with someone else's likeness. While the act of faking content is not new, deepfakes leverage powerful techniques from machine learning and artificial intelligence to manipulate or generate visual and audio content with a high potential to deceive. The main machine learning methods used to create deepfakes are based on deep learning and involve training generative neural network architectures, such as autoencoders or generative adversarial networks (GANs).