What internet users are calling as “taking cat burglar to next level” is a viral video on Reddit of a cat who can be seen carrying around toilet paper rolls.

What internet users are calling as “taking cat burglar to next level” is a viral video of a cat who can be seen carrying around toilet paper amid its global shortage during the COVID-19 pandemic. The Reddit user humorously reacts to the impact of the ongoing pandemic which led to the shortage of essential goods, mainly toilet paper, because people resorted to panic buying in the wake of lockdowns to curb the spread of coronavirus. The internet user captioned the video as the next step to train the animal would be to burgle in the neighbour’s home.

Next step...train him to burgle the neighbor’s house. from funny

Most internet users were seen calling the animal has ‘fur burglar’ or ‘cat burglar’ implying that the cat was sneaking away with the toilet papers. One of the netizens even called it “great post” while others related the video to their pets who would not do anything to help their parents. One Reddit user said her pet would “rather bring dead animals”. 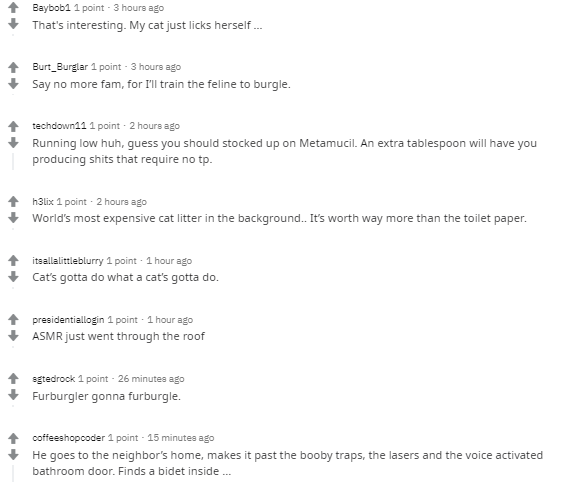 Read - 'Sweet Beauty': This Cat Brings Slippers For Her Owner Every Morning; Watch

In another viral post on Reddit, a pet cat can be seen bringing its parent’s slippers. A Reddit user posted a short clip of 16 seconds and explained how her mother used to talk about the cat’s habit of bringing her slippers every morning. However, the caption also said that she did not believe her mother until she received the video. In the 16-second-clip, the furry animal can be seen meow-ing and bringing brown slippers of its parent and then going away.

The viral video has now been shared across social media platforms from some people calling it “so cute” to others comparing the cat in the video to their pets. One of them even commented that her cat would instead bring a loaf of bread to bed and shred it all by itself. One of Reddit users even said, “I love the aggressive meowing once she succeeds in bringing the slipper”. Another said, “I loved the om nom nom meow she did”.

My mom adopted a cat that brings her slippers to her every morning. I didn’t believe her until she got it on camera finally from aww