YouTuber Gaurav Taneja's fans recently started trending #BoycottAirAsia after he uploaded a video discussing why he got suspended from the airlines.

Youtuber Gaurav Taneja aka Flying Beast enjoys a massive following on YouTube where he has over 2.8 million subscribers. The YouTube personality uploads daily on his channel and garners over 1 million views per video, which makes him one of the most successful YouTubers in the country. Some might be unaware that besides being a successful YouTube star, Gaurav Taneja is also a pilot associated with Air Asia. Now, the actor has shared a video on his YouTube channel where he shared the reason behind his suspension from Air Asia which has now resulted in a number of his fans using #BoycottAirAsia on Twitter to speak against the company and in favour of Gaurav Taneja.

Pilot Gaurav Taneja has been sharing a number of tweets and vlogs back and forth with Air Asia. In the video, Gaurav Taneja raised objections against the HR section of the company and revealed that they have an ''unfavourable'' sick leave policy. He also recalled an incident where he was asked to report for work even after being sick. Gaurav stated in his video that if a pilot is not feeling well, he/she cannot fly the plane as it is endangering the lives of people on board.

Also read: Sushant Singh Rajput's death: Gulshan Devaiah says 'We actors think we know why he did it'

Gaurav also revealed that the company did not seriously follow the safety guidelines during COVID-19 outbreak. He revealed that he even shared his worries on many of the company's WhatsApp groups which were ignored. Gaurav pointed out the serious lack of management in the airlines. After the series of tweets and a video posted by Gaurav Taneja started gaining engagement, his fans trended the BoyCottAirAsia and shared their grievances with the company.

Today I have been officially suspended from @AirAsiaIndian for standing up for safe operations of an aircraft and its passengers.@AwakenIndia #SabkeLiye

Various users shared their thoughts about the situation Gaurav Taneja has to face. Many of his fans criticised the airlines for not following safety protocols in order to gain profit. Others also came in support of Gaurav Taneja and wrote that they stand with the YouTube star as the lives and safety of passengers is important. Some of his fans also wrote that Gaurav Taneja cannot be stopped now as he has the majority of fans supporting him. Check out their reactions below - 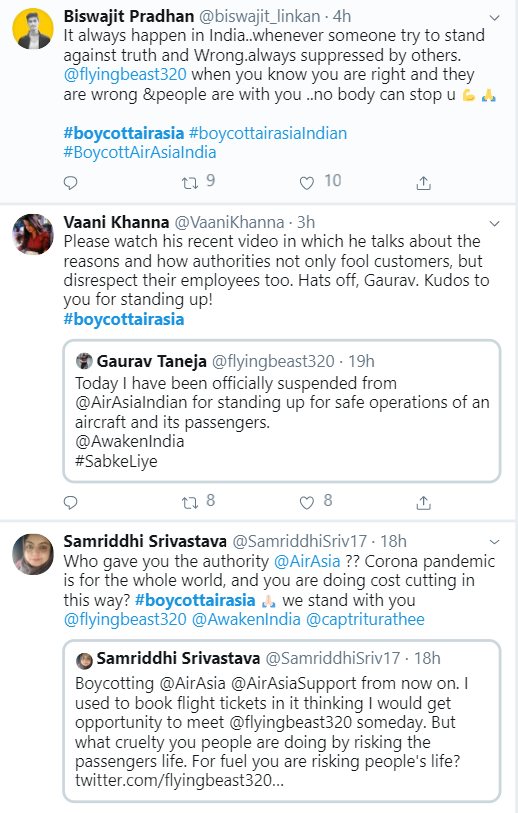 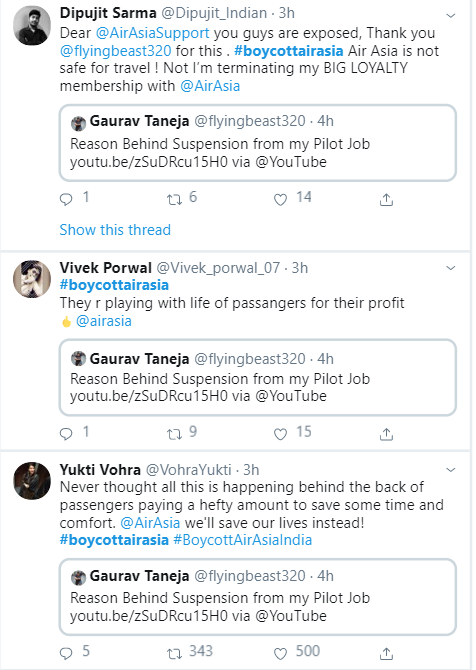