Amid coronavirus pandemic, people are stuck indoors due to the lockdown measures and they are finding creative ways to spend their time in isolation. A couple from Hungary have come up with the best possible way to utilise their time as they are recreating some iconic scenes from their favourite Hollywood blockbuster films. The couple took to Facebook to show how they are using different locations in their house along with the basic resources, like toilet paper and sausages, to recreate the movie scenes.

While speaking to an international media outlet, the couple said they as they possess a lot of accessories and costumes, they have managed to recreate scenes from Star Wars, Rambo, Men in Black, Iron Man, and The Shining. The couple, Fanni Kovacs and Husszu Norbert said that they recreated scenes and improvised based on the accessories they had in their house. From using a kitchen tool for Sylvester Stallone’s scene from First Blood to using toilet paper for recreating other movie scenes, the couple has been lauded for their creativity.

READ:  Assam: Siblings Perform With Drums Made From Cardboard And Steel Tray

READ: Video Of Monkey Flying A Kite Amid Lockdown Leaves Netizens In Splits

With several internet users resharing their Facebook posts, netizens have also called their idea ‘brilliant’. One Facebook user wrote, “The best thing I’ve seen lately”. Another user while calling them ‘an addiction’ suggested, “There could be movie details with short dialogue?!” READ: Police Therapy Dog Sleeps Through His Own Swear-in Ceremony, Video Has Netizens In Splits 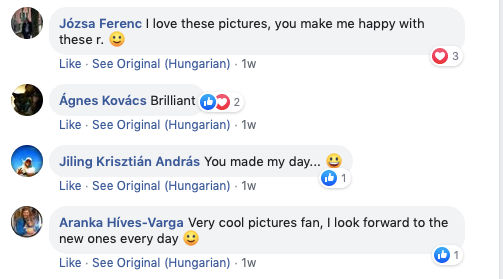 Meanwhile, coronavirus, which originated in China in December 2019, has now claimed over 146,000 lives worldwide as of April 17. According to the tally by an international news agency, the pandemic has now spread to 210 countries and territories and has infected more than 2.1 million people. Out of the total infections, more than 553,000 have recovered but the easily spread virus is continuing to disrupt many lives. Major cities have been put under lockdown in almost all countries including Spain, and the economy is struggling.

READ: What Happened To Eve On 'Last Man Standing'? Will She Ever Come Back?