Instagramer Shubhankit Sharma supports YouTuber CarryMinati. He took to his social media and shared a pic where he revealed that he is in talks with Youtube.

CarryMinati aka Ajey Nagar in recent time has been getting a lot of attention due to his video TikTok Vs YouTube: The End. This video was loved by fans and was on a verge to break records. But the video was taken down due to it being reported as cyberbullying. After the video was taken down, many fans came in support of CarryMinati and want YouTube to reupload the video. After this, Instagram influencer Shubhankit Sharma came forward and showed his fans how he has written to the top officials to upload the video. Take a look at the post here. 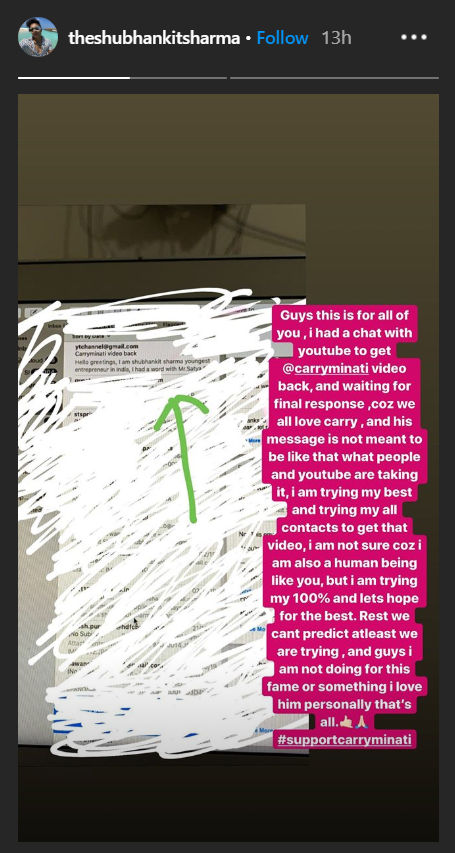 Shubhankit Sharma took to his Instagram story on May 17, 2020, and revealed that he had written to the top officials at YouTube to release the CarryMinati's video TikTok Vs YouTube: The End. In his post, he wrote "Guys this is for all you, I had a chat wit youtube to get @carryminati video back, and waiting for final response, coz we all love carry, and his message is not meant t be like that what peopl and youtube are taking it, i am trying my best. and trying my all contacts to get tha video, i am not sure coz am also a human being like you. but i am trying my 100% and lets hope for the best. Rest we cant predict atleast w are trying , and guys am not doing for this tame or something i I him personally all. #suppprtcarryminati".

Shubhankit Sharma also shared a screenshot of his Twitter feed and appealed a fan not to mix things up. He replied to a fan who wrote "Carry Minati's video was not just a video, it was an emotion for those 16.7M people. It was not against LGBTQ community. Their emotions are being misused by people for their own benefit.@YouTubeIndia  #justiceforcarry #BanTikTokInIndia BOT USERS". He replied so on one of his COVID-19 posts. After the user talked about this on Twitter, Shubhankit Sharma expressed that "The thing is that we are here for togetherness, we dont have to spread hate, tik tok is a different thing and youtube is different things, i respect both the platform @TikTok_IN  and @YouTubeIndia they both gave platform to us to show case our talent".

Here is how fans are reacting to this

Someone - breakup hurts the most
Me - kbhi esa hoga, socha tha? ðŸ’”#carryminati pic.twitter.com/vjm6SPFfBZ

Guru Randhawa (@GuruOfficial) Tweeted:
This post is for @CarryMinati . You have done great in your Carrier so far and you will do great always bro.
All my best wishes to you and all the youtubers and independent creators out there.
Hardwork ðŸ”¥ðŸ”¥ (https://t.co/pUctMWMzTa)