As CarryMinati issued a statement on his deleted video, Guru Randhawa, Mannara and YouTubers reacted. They expressed their solidarity with the YouTuber

The controversy over CarryMinati aka Ajey Nagar’s TikTok vs YouTube: The End video for close to a week seemed to subside on Saturday after the YouTuber broke his silence. Though expressing his disappointment that a video being tipped for global records was deleted, he seemed to have accepted that the video won’t be restored by YouTube again, as he conveyed his gratitude to fans for the support. Not just fans, numerous celebrities also came out in his support after his statement.

Fellow members of the YouTube creators’ community expressed solidarity with him. Bhuvan Bam wrote how it will always be remembered as the most-liked video.

Deep down everyone will remember that yours was/will be the most liked YT video ever. We love you.

Zakir Khan wrote how such things happen only with accomplished persons.

All the best and lot of love!

Ashish Chanchlani wrote that he should be not disheartened with this, but try to create a record with this next one, while sharing that the support and love for him was intense. 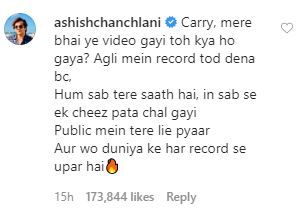 BeYounik wrote ‘May the Force Be with You.’

Not just YouTubers, many others also came out in CarryMinati’s support. Singer Guru Randhawa wrote that CarryMinati had ‘done a great job’ and worked hard while wishing him, and at the same time, TikTokers, who have been pitted against YouTubers, the best.

This post is for @CarryMinati . You have done great in your Carrier so far and you will do great always bro.
All my best wishes to you and all the youtubers and independent creators out there.
Hardwork ðŸ”¥ðŸ”¥

And good luck to all tiktok creators too.#hardwork

READ: Fans Demanding Justice For CarryMinati And Other Top Viral Stories Of The Past Week

Actor Mannara was still not pleased with the video being deleted and stated that since YouTube was a ‘people’s platform’ they should have a right on if the video should be restored or not.

It’s a people’s platform,so let people decide what they want to see and what not @YouTube

Actor Varun Sood sent ‘more power’ to CarryMinati, terming him as a ‘great creator’ and reiterating the audience support for him. Actor-singer Amit Tandon wrote that he ‘killed it’ and added that despite the fate, no one could take back what he had said.

For the unvered, fans of CarryMinati were furious at YouTube after TikTok vs YouTube: The End was pulled down for violating its 'terms of service.’ The video that hit back at TikToker Amir Siddiqui featured abuses and was deleted after it was reported. The video had garnered 70 million views by then.

In a statement, CarryMinati said that not getting any answers over it was ‘most disappointing’ for him, but he felt the video will remain ‘banned.’