The entire world is on lockdown due to the pandemic but new stories still keep coming. Here are the viral news stories like justice for CarryMinati and more.

The entire world is on lockdown due to the coronavirus global pandemic. However, the new stories always keep coming in. Here are the most viral news stories from the past week. Read ahead to know more-

Top viral news in the past week

CarryMinati has been one of the most followed celebrities who is popular for his Youtube videos. He has recently uploaded a roast video called Youtube Vs Tik Tok that was taken down due to violating its ‘terms of service’. The video was one of the most trending videos on Youtube. After CarryMinati’s video got deleted, a lot of his fans have been furious and have started a trending hashtag, #JusticeForCarry on Twitter. Thousands have been sharing posts expressing that it was not fair that CarryMinati’s efforts would go down the drain after all. Here are some fan tweets on  #JusticeForCarry.

Your voice will not be heard by tweets or playstore comments until it drills giants pocket youtube revenue module. 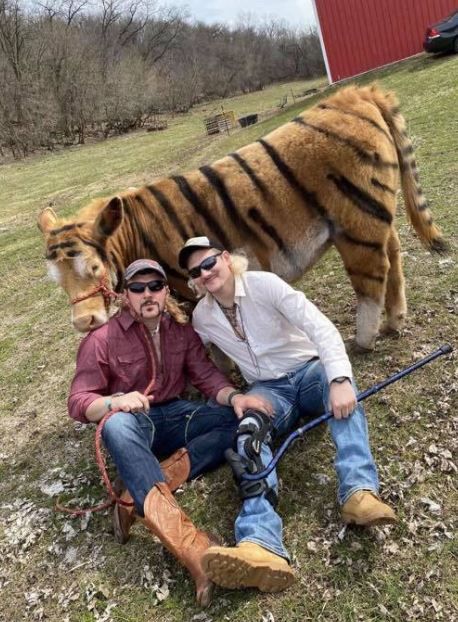 Joe Exotic has become so popular after the release of Tiger King that many fans of the show have tried to impersonate him. Two farmers named Kyle Harris and Jeffrey Kast from the United States recently tried to recreate the Joe Exotic look from the eight-part mini-series but with a twist of their own. The farmers, who belong to Wisconsin, painted one of their farm animal in yellow and black to make it look like a tiger. The duo then posed in front of the painted animal just like Joe Exotic did with one of the many tigers that he had in his zoo. The two men even dressed up like Joe Exotic to make the picture look more realistic.

Pandas giving company to people who eat alone at restaurants

Earlier this month, Thailand eased its restrictions on businesses as the number of coronavirus cases slowed down. The place allowed restaurants to function but with strict rules to curb the spread of deadly coronavirus disease. A restaurant in Thailand makes sure that it meets with its social distancing rules as they are providing company to the lonely diners by placing stuffed pandas on the tables.

Did you know that people in Venezuela often pass wine across rooftops to celebrate happy hour during quarantine?@billwamukota #COVID19 #DefeatCoronaKE pic.twitter.com/WypdMf717M

To stay safe and prevent the virus, there have been lockdowns imposed in all major countries. To pass time, Venezuelans have been passing wine across rooftops to celebrate a 'happy hour' that is leading to friendships over pleasant conversations with music playing in the background. The tradition of enhancing friendships among neighbours began when people shared wine by pouring the drink into a plastic container tied to a fishing line and then throwing it to someone’s house nearby.

Cristiano Ronaldo and Lionel Messi has 24 hours to respond to this ðŸ”¥ðŸ”¥ðŸ”¥ pic.twitter.com/2CJD4ymc8U

On May 15, 2020, a woman juggling a football in high heels stunned the internet. In this video, Raquel Benetti from Brazil is seen juggling the football and showing off some tricks while wearing pencil heels. The clip was shared on Twitter under the user name Seun, who has also challenged ace footballers like Cristiano Ronaldo and Lionel Messi, for a response. Since the video went viral, it has received 100.3 thousand views and 9.4k likes. Netizens spammed the video with comments that praised Benetti for her impeccable skills. Many also claimed that no man could juggle with a football wearing high heels as she did.

PEOPLE HAVE PLEDGED SO FAR
LATEST NEWS
View all
14 hours ago
Mumbai's DJ swaps his console for scrubs & serves as a frontline volunteer
16 hours ago
Video: Baby koala pops out of 'mum's pouch to say hello', netizens overjoyed
13 hours ago
Meet Jack Rico: 13-year-old boy who graduated with four associate degrees
13 hours ago
Meet 'Frank', the peacock who travelled over 1,000 km in pursuit of love
13 hours ago
China: Delivery man hailed for climbing two storeys to rescue child dangling from a window