People are reminiscing how they found some best friends, or why it never worked out, or just plainly appreciating the “kind deed” in heart melting experiences.

A thread on Reddit community titled “What's the most wholesome experience you've had with a stranger?” has commenced a discussion about the memorable interactions people have had with strangers. People are reminiscing how they may have found some of their best friends, or why it never worked out, or just plainly appreciating the “kind deed” done by an anonymous somebody. Posted by the user named Epices, under the subreddit AskReddit, the post has amassed nearly 55k upvotes and has a wide array of experiences narrated by the people about the thrilling, awkward, long-lasting, but most of all kind encounters that they’ve had with the strangers during the course of their lifetimes.

While some encounters reeked of deep affection that would encourage the introverts to socially open up to whoever they run into, many accounts were about people going out of their way to help someone in need despite no acquaintances. The thread with over 8k comments is now motivating the millennials to choose kindness, every single time. “I was in London and was supposed to be flying home that day. I walked with my two suitcases towards the tube station. A young man comes up to me and offers to help carry my suitcases,” one narrates. “It starts raining, he calls me a cab,” continued a woman named Andria. “I just couldn’t believe the kindness he showed to some random person on the street,” she added. “When I was 16, I drove my mom’s old Pontiac Bonneville to the movie theatre and turn off the lights,” narrated another. “When I came out, the car was dead but someone left a set of jumper cables on the hood with a note that said, ‘I hope you make it home safely.’” “Since then,” the user named Good said, “I’ve tried to pay that kindness forward.”

What's the most wholesome experience you've had with a stranger? from AskReddit

Relating a memorable encounter with an anonymous guy, another user said, “I was using crutches and walked into Melbourne spring storm, a guy with very limited English walked me holding an umbrella.” “Lovely, warm fuzzy memories,” she added. In another recollection of haunting memory, a user wrote, “When I was 18, I had a friend in the hospital with brain cancer whose time may have been limited. He was a hippie alternative punk. I wore a leather jacket for him, donned long hair, walked towards his room to cheer him, a nurse saw me. “Without saying a word she walked to me and gave me a long comforting hug. That's how I knew he passed,” he added.

Reminiscing how helpful the strangers may be, contrary to the stereotypical belief that interaction with strangers was apparently harmful, a girl recalled, “I had just lost my job and my dad had his card stolen. We were completely out of food and living in an old, run-down RV. Someone knocked on the door, some strangers with food who noticed us in the parking lot wanted to know if my dad needed anything,” the girl narrated. “From canned goods to fresh meat, milk, pasta they had bought us all with their money,” she added. She said that she had never forgotten the strangers’ generosity. Several such heart-melting experiences has had the internet focusing on the importance of a good deed, especially at the challenging times of the crisis. “It’s a delight to see when people go out of their way and get creative about generosity,” a user commented on one of the threads, appreciating the discussion. 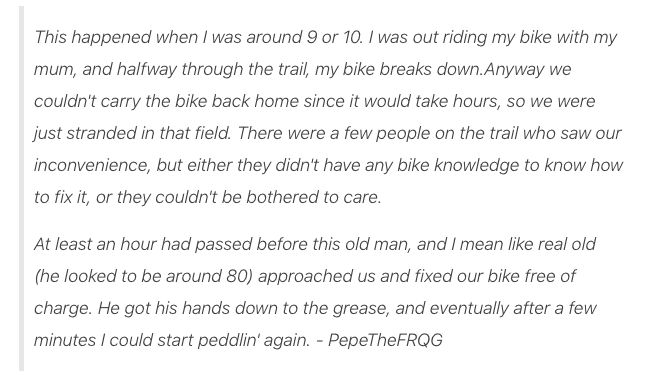