A recently posted video clip shows a pet dog cheering up his brother in most adorable manner. The almost 15-second long clip is now doing rounds of internet.

A recently posted video clip shows a doggo cheering up his brother in the most adorable manner. The almost 15-second long clip was shared on Reddit by user ‘Animal being Bros’ and shows the adorable bond between the two.  In the caption, he revealed, “ Lolo was crying so little brother Diesel brought him his favourite toy and gave him lots of kisses until he stopped crying and started to play.”

The brief video which has now garnered nearly 27,000 upvotes and almost 200 comments, features the white coloured Lolo and his brother, black coloured doggo named Diesel. The clip starts by showing Lolo, sitting in a corner, wearing a cone. As the video progresses, the compassionate Diseal then approaches him, gently licking his face and caressing him.

'This is so sweet'

Since shared, this post has created quite a buzz and won the hearts of many. While many showered plaudits on the caring doggo, many others were concerned about Lolo. Later it was found that the poor dog had seasonal allergies. One user wrote, "Would you like someone here to lick your face in these trying times" while another wrote,"I reverse the cones on mine seems to make them happier. It's still effective but they can use their peripheral vision". Yet another wrote,"Omg i am not a crier but this almost brought me to tears, so so sweet".

Read: Homeless Man Reunites With His Dog In A Heartwarming Video; Netizens In Awe 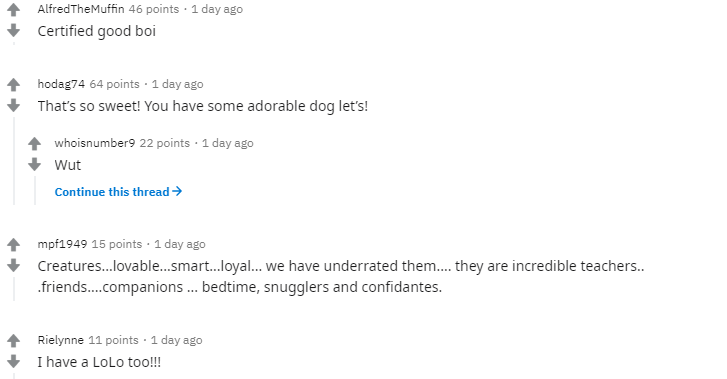 Recently, a video of a guilty-looking golden retriever apologizing to his brother surfaced on the internet. The 37-second video shared by American Basketball player Rex Chapman on Twitter features two pooch brothers –Watson and Kiko. As the video progresses, Watson is asked to apologise to Kiko for stealing his treats and Watson’s apology has left netizens in awe.

The video clip shows both, Watson and Kiko lying down when suddenly their owner asks Watson if he understands what she's talking to him, to which, Watson replies by nodding. The human than says, “I gave you a chewy and Kiko a chewy. You ate Kiko's Chewy'. She then goes to ask Watson what should he say when he steals Kiko’s chewy. As soon as Watson hears his owner's words, he immediately goes and hugs his brother. The clip ends with the human patting both the dogs and telling them that they are “good boys”