MAX appeared as a guest in an internet show & talked about his song. Later 'Uncle Suga' started trending on Twitter when MAX made a statement about BTS' Suga. 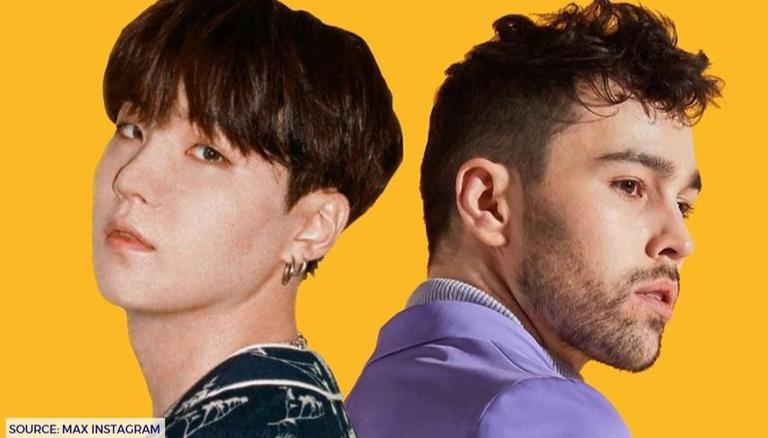 MYX's VJ and TV/Online show host Ai Dela Cruz recently hosted an online event featuring American singer MAX. She asked about BTS' Suga and Max's experience of working in a song together titled Blueberry Eyes. The video of the song had even featured MAX's wife Emily. Read on about the event and how Uncle Suga started trending on Twitter after this online interview.

Thank you for all the stories you shared about your music and your friendship with SUGA, @MAXMusic! 💕

The whole BTS ARMY is waiting for your baby daughter to call him UNCLE SUGA 🥺💜 https://t.co/O6ItR5PoB3

ALSO READ| BTS' Suga Has Been Producing Music Since The Age Of 13; Read More Trivia About The Star

Host Ai Dela Cruz starts the interview by asking MAX whether like his fans he too wants Suga to become his daughter's godfather? To which Max replied “He’s definitely gonna be Uncle Suga. I can’t wait to go to Korea, my wife didn't get to come for the 1st time to Korea. To have such a good friend there and he is such an incredible host like when he brought me to Korean barbeque here and he’s just so giving, I feel like I can’t wait for my baby girl and Emily to finally meet. I remember I sent him the sonogram picture (MAX daughter's sonogram) and he was like so excited when I revealed it and that she was being born and so he’s gonna be a great Uncle SUGA in Korea when she meets him.” The BTS fans were seen to be elated by the fact that MAX called Suga as a great uncle to his daughter. Look at some of the fan reactions on the same.

And he said “uncle suga is going to be a great uncle” I CANT THEIR FRIENDSHIP IS JUST BEYOND 😭😭😭😭😭 pic.twitter.com/bDMqBzYoXp

Imagine being born into the world where an “Uncle SUGA” exists 😭😭😭

BTS Suga’s new international collaboration is out now. He has worked with MAX who is known by the name Max Schneider in Blueberry Eyes song. The music video for Blueberry Eyes has a lot of ‘blue aesthetics’ and also features MAX’s wife Emily. In an interview with Teen Vogue, MAX spoke about being accepted by the fan base of BTS that is Army. MAX had earlier collaborated with BTS’ Suga before for the song Burn It. The song was a different mix, unlike Blueberry Eyes. The track released back in the month of June and consists of extreme VFX, rap and songs voiced by the two. Take a look at the MV of the MAX and Suga's Blueberry Eyes.

WE RECOMMEND
BTS' Suga has been producing music since the age of 13; Read more trivia about the star
BTS' Suga is the first ever Korean artist to be on No 1 'Digital Rap Song Sales' Chart
BTS Suga’s collab with MAX ‘Blueberry Eyes’ is out now & it is everything ‘Blue’
BTS Suga's Interlude: Shadow just broke their own band's records, read more!
BTS' Suga and IU set to release their upcoming single digitally
Listen to the latest songs, only on JioSaavn.com