YouTuber Gives Away $2021 To Strangers In Act Of Kindness, Netizens Call Him ‘inspiration’

Juan Gonzalez, host of That Was Epic on YouTube, was seen handing the unsuspecting strangers bundle of cash in a kind gesture that earned him laurels online.

A YouTuber in the US has taken the Internet by storm after he took an initiative to distribute $2021 (1.5 lakh) to random strangers on the street amid the difficult times of the coronavirus pandemic. Juan Gonzalez, the host of That Was Epic on YouTube, was seen handing the unsuspecting strangers bundle of cash in a kind gesture that earned him laurels on the internet. In the nearly 10 minutes video that he shared on his official YouTube channel ‘ThatWasEpic’, which has now garnered 798,603 views, the celebrity digital creator was seen approaching random pupil on the street and helping them financially to bring them some happiness as they ring in the new year, 2021.

“Giving People $2021 To Start Off The Year”, Gonzalez, renowned for making his fans happy by routinely giving away handouts like the popular YouTuber Mr. Beast, wrote in the video’s caption. The kind-hearted YouTuber was seen communicating with the strangers as he introduced himself first and then extended financial help of $2021, asking the strangers to make 2021 as their year. Upon receiving the cash, the recipients' demeanor changes as they were seen smiling and glistening with joy after receiving cash from Gonzalez.

Giving People $2021 To Start Off The Year

Read: Did Kanye West Cheat On Kim Kardashian? Find Out What The Netizens Have To Say

In a similar gesture earlier, the popular Youtuber made his fans and supporters happy by randomly showing up at their doorstep and paying their rent. Gonzalez impressed his 3.7 million subscribers after he shot himself reaching out to random strangers at their homes and giving them cash in an incredible act of kindness. The video went viral as Gonzales casually enquired from the strangers how much they paid in rent and immediately extended hundred-dollar bills for them to clear it.

Many residents were moved to tears, while others were rendered completely shocked, while a few appreciated the help calling the YouTuber an ‘angel’. "You know, I've been praying about this? I don't have rent money for tomorrow,” one can be heard saying in the footage. Lauding his new gesture where he decides to financially support strangers, netizens commented that the YouTuber was “doing God's job.” 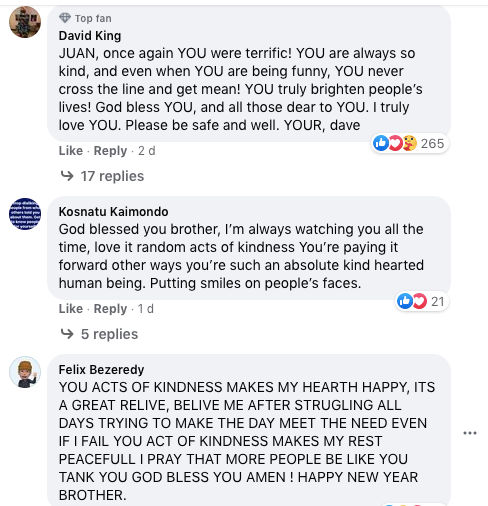