Fact Check: Is The Picture Of A 13-year-old Boy In UK Passing Away Due To COVID-19 Real?

Fact check: A picture that is making rounds on the social media is of a boy named Ismail Mohamed Abdulwahab who is the youngest in the UK to die of coronavirus

The fatalities due to COVID-19 has been increasing day by day as a number of people contracting the disease has also increased. A recent post by news agencies in the United Kingdom claimed that a 13-year-old boy in the UK became the youngest person to pass away due to coronavirus. There are many posts that also include a picture of the boy, but these pictures have raised the question of authenticity about the news.

The posts made on social media portals like Twitter and Facebook claim that a young boy of 13 years of age named Ismail Mohamed Abdulwahab passed away from coronavirus. He is said to be a schoolboy from Brixton and allegedly breathed his last at the King's College Hospital in London. He became the youngest person to die in the UK. The picture below shows a news portal updating the news with the picture that is being circulated on the internet.

Ismail Mohamed Abdulwahab, become the youngest victim of Coronavirus in UK, Ismail who was passed away at the tender age of 13. was describe as gentle & kind.
RIJF pic.twitter.com/WWAjFIiTj3

While the unfortunate news of a 13-year-old boy in the UK passing away is true, the picture being circulated is fake. The picture belongs to a boy named Conor Wilmot from Ireland. Conor passed away in 2017 due to a tragic suicide.

Photo shows schoolboy who died after contracting COVID-19 in the UK?

False âŒ This photo has circulated in reports about an Irish teenager who died in 2017 https://t.co/ES5pSVWqar#CoronavirusFacts

ALSO READ | Fact Check - Can Government Read WhatsApp Chats Based On The Number Of Ticks You See?

A UK news source had reported the death of Ismail Mohamed Abdulwahab on April 1, 2020. It also talked about how the parents of Ismail had shared that he had no underlying health issues. Ismail became the youngest person in the UK to lose their life due to COVID-19.

The picture that is being circulated with the above news on social media is that of Conor Wilmot. An Irish newspaper had reported Conor's death, claiming it to be because of the dangerous Blue Whale challenge that became famous in 2017. Conor had taken his own life after he got bullied to do say, as claimed by his father. The Sixmilebridge family shared their horror as Conor's sister talked about how they are devastated to see people using Conor's picture for news. The family had to suffer another tragedy as Conor's father Greg had also passed away in 2018, the news source reported.

Here is a picture of the report shared by the Irish Times in the year 2017 about Conor Wilmot: 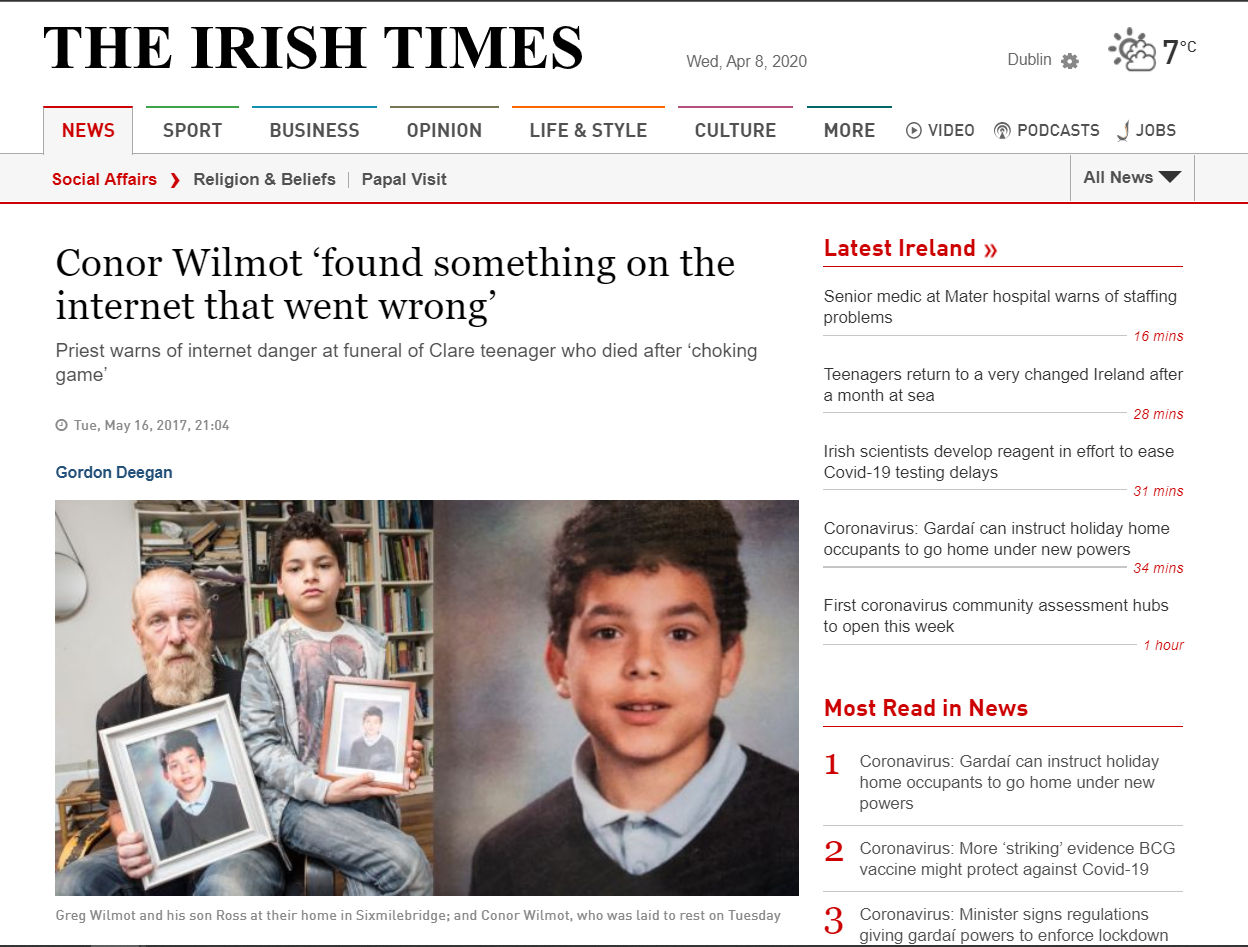 ALSO READ | Fact Check: Is Tiger King Positive For Coronavirus? Did He Contract The Virus In Prison?