Fact Check: Was The Army Deployed In Gujarat Due To The Coronavirus Outbreak?

Fact check: A number of stories were claiming that the Army has been deployed in Gujarat, but those claims since then have been proven wrong.

The ongoing coronavirus pandemic had led to a number of fake stories emerging on the internet and print media. Be it finding a cure for the ongoing pandemic or finding the root of it, these fake stories target the ongoing events and spin out narratives which are completely fabricated. One such story has now been brought to light.

One of the regional print media houses in Gujarat had recently reported that the Army has been deployed in the area in order to maintain lockdown. Various stories were also claiming that the Army personnel which were due for retirement and holidays have been recalled and deployed in Gujarat. Though these reports had no credible sources to back their claim, some questionable media outlets did run stories about the Army in Gujarat.

As seen earlier on various instances, when regional media outlets run an unverified story, the official bodies have to come forward and weigh in on the matter. This time around, a similar incident took place. The official Twitter account of Additional Directorate General of Public Information announced that the claim of Army deployed in Gujarat is not true in any matter. They also urged media outlets to confirm a story before publication.

Fake & incorrect news found published in print media about Army deployment in Gujarat & instructions given to Army personnel on leave & due for retirement under present circumstances. Media is requested to confirm such inputs from authorised sources only prior to publication. pic.twitter.com/QwbE2Qvmcg

Also read: Fact check: Are Beijing and Shanghai in China not affected by the coronavirus outbreak?

As per reports, the story was first run by regional news publication hubs in Gujarat. Stories claimed that the Army has been deployed with expectations of using force against people not following the lockdown. This reportedly brought upon a situation of confusion and fear amongst people.

With the ongoing pandemic, a number of fake stories do rounds on social media and other platforms. To verify these fake stories, people use Google as a trustable platform to navigate through fake stories and get the real news. In this scenario too, people took to Google and searched whether the Army is actually deployed in Gujarat. 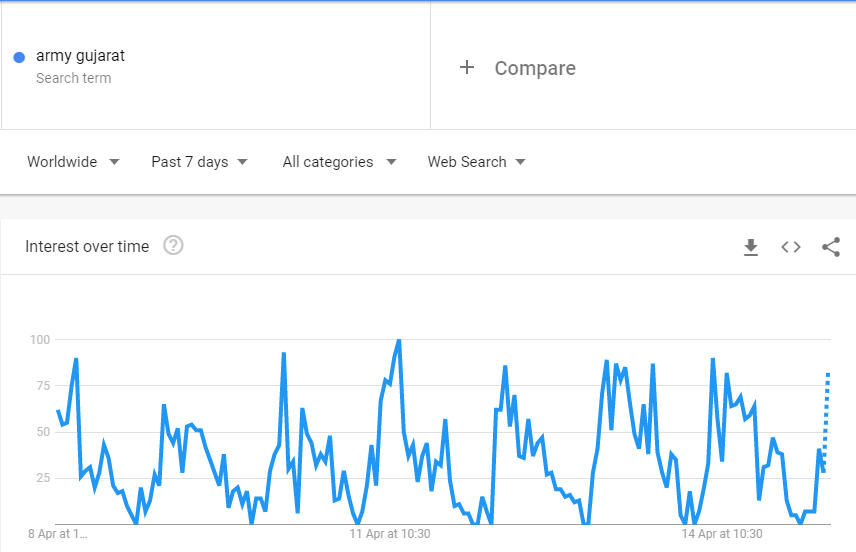