Fact check: Rumours on social media claim that actor and martial artist Chuck Norris has passed away at the age of 77 at his home in Texas, US. Is it true?

While many are battling with coronavirus crisis, there is yet another problem that people are facing, which is the spread of fake and misleading news. It seems that more and more fake news is being made and spread across the globe with the help of social media. One of the most recent news items that came forward on social media is that the Martial Artist Chuck Norris has passed away at the age of 77.

There have been posts and claims on social media which says that Chuck Norris is dead at the age of 77. The post talks about how he passed away at his home in Northwood Hills in Texas. It also reminds people that Chuck has been a part of dozens of movies and TV series and also has entertained people. Chuck Norris was also an expert in martial arts, which was the reason why he had become famous in the movie industry, along with the famous line of jokes he inspired, which have been since mirrored elsewhere, such as in reference to Rajinikanth. 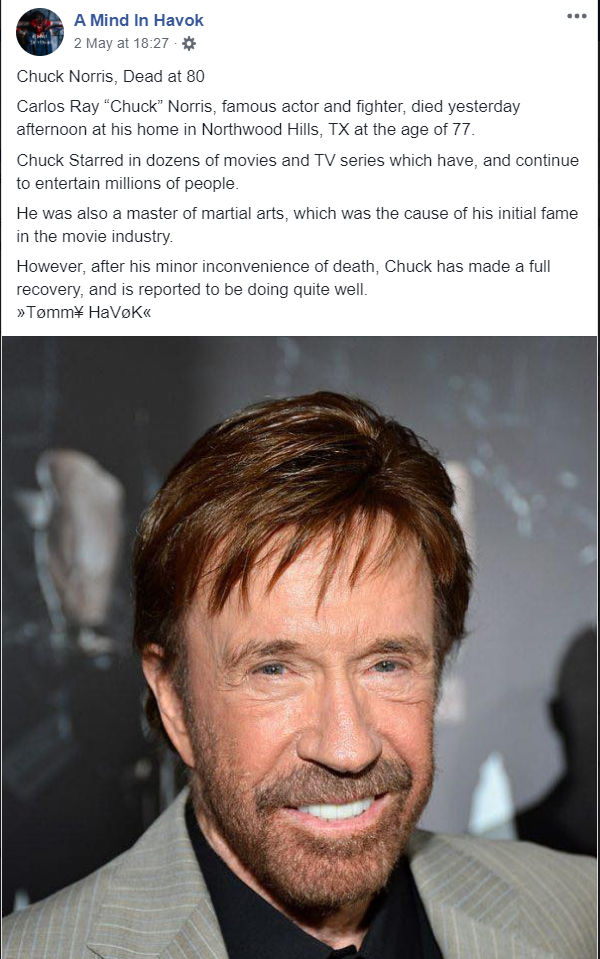 The post made by people on social media in itself is proof that the news is fake. The last line in the post claims that after he had the 'minor inconvenience' of dying, he has made full recovery and is reported to do quite well. The article attached to the post is also made by a site named 'Conservative Tears', whose tagline says, 'Death hoaxes for your thoughts and prayers'.

Chuck Norris is alive and healthy

The posts that claimed 'Chuck Norris dead at 77' are based off on a website named Conservative Tears. The whole site is based on hoaxes. They create fake news about a celebrity or a famous person dying and thus claim that the said person is no more. The article written on Chuck Norris talks about how the Deputy Sheriff was 'sneaking up to Chuck's upstairs bedroom' when he found his body. It also claims that Chuck Norris came in support of President Donald Trump and then was mysteriously killed. The entire news is fake and Chuck Norris is alive and well.