Is Prashant Kishor Forming A Pan India Nexus Against The BJP To Fight Elections?

Following Kejriwal's tweet welcoming IPAC on-board ahead of 2020 elections, rumours about Prashant Kishor's strategy for 2024 continues. What will he do next?

Trinamool Congress poll strategist and I-PAC brainchild Prashant Kishor has reportedly been roped in by AAP ahead of the 2020 Delhi elections to oversee Arvind Kejriwal’s quest to return as Chief Minister. Delhi CM Kejriwal shared a tweet on the microblogging website on Saturday, December 14, welcoming aboard the political advocacy group I-PAC. Indian Political Action Committee (IPAC) was formed by Prashant Kishor and other members of the CAG (Citizens for Accountable Governance) in 2015. Since its inception, the group has been known to work with several leading regional and national parties across the country.

Happy to share that @indianpac is coming on-board with us. Welcome aboard!

Overview of I-PAC's work since it was established in 2015:

After coordinating efforts of the leadership as well as cadres of Janata Dal United (JDU), Rashtriya Janata Dal (RJD) and Congress, that ensured the Mahagathbandhan’s superlative win in Bihar in 2015, sources revealed that the I-PAC team expanded voter base projecting Nitish Kumar, the face of JDU as the leader who was seeking another term as the State’s CM.

Read | After masterminding 'Sonia Sainiks' what will Prashant Kishor do now? Details here

The exhaustive campaign involved party workers visiting even the remotest villages in Bihar and handing every household a hand-written letter along with a calendar, urging citizens to vote for Nitish Kumar.

Cycling for a mission: Nitish branded bicycles and Swabhiman Raths

Yellow bicycles carrying seven campaign promises made by the CM were ridden across the State to familiarise voters about party flag, message, symbols and leaders.

I-PAC team distributed letters to voters with campaign promises asking people to give a “missed call” to the number mentioned in the letter. Upon giving a missed call, the voter would receive a call from none other than Nitish Kumar. The automated voice call thanked the voters for believing in Democracy and further urged them to cast their vote for the Mahagathbandhan.

#Thowback to our time in UP where a series of disruptor campaigns, such as the Kisan Yatra led by Rahul Gandhi, helped the nation to take notice of the farmers' issues!#ElectionsInIndia #UttarPradesh #WhatWeDo #TransformativeImPACt #IPACCampaigns pic.twitter.com/Q29bP7WNoJ

Poster war and foot soldiers were the main focus points. While the Opposition relied on television and print advertisements, Congress relied on more traditional grounds. However, this was a failed campaign as it did not incorporate the youth or technology effectively. This led to the defeat of Rahul Gandhi, ultimately in his constituency.

After 709 days, more than 35 campaign formats, 118cr impressions & the support of over 7 Lakh individuals, this sweeping victory is a sweet reward for all of us & @PrashantKishor ! Congratulations to the new Chief Minister of AP, @ysjagan !#Verdict2019 #APElections2019 pic.twitter.com/yG70Dp07td

The campaign strategies were similar for both States. Starting from WhatsApp groups, Pada Yatras and even music videos, the team’s extensive groundwork propelled the parties to power with overwhelming majority, handing over a shocking defeat to the BJP in Punjab and Chandrababu Naidu in Andhra Pradesh.

Aaditya Sanwaad: According to sources, a one-to-one interaction with Aaditya Thackeray to connect with the youth of the State was also strategized by Kishor. Several meetings with the youth leader was organised as a way to bring more relatability and familiarity with the masses. 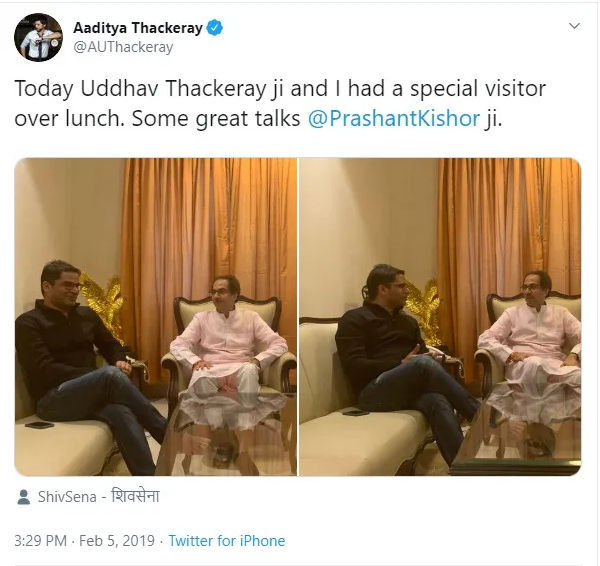 Friends of Aaditya: Sources told Republic Media Network, interactive sessions with urban professionals to improve the young leader’s outreach among the urban population was also planned. Attempts to promote Shiv Sena as a party, not just for Maharashtrians in urban sectors, were also pivotal in the State. An example of this is the hoardings that were put-up all-over Mumbai with greetings and messages for Aaditya Thackeray as the new CM of the State in different regional languages, as opposed to just Marathi or Hindi.

What lies ahead for the Prashant Kishor led-IPAC?

News broke out in the early hours of Saturday, December 14, that I-PAC has been roped in by AAP ahead of the 2020 Delhi elections. Apart from this, the organisation is also working with TMC in West Bengal, JDU in Bihar and sources reveal that the firm has been approached by DMK and Kamal Hassan’s People’s Justice Party in Tamil Nadu for the upcoming elections in 2021.

Upon closer observation, what this reveals is that since the formation of I-PAC, the organisation has been taking on BJP at every front across the nation. All the parties Prashant Kishor has campaigned for or rumoured to assist have either primarily been at loggerheads with the BJP or after elections ended their alliance with the party. This raises several questions about Prashant Kishor’s schemes and agenda. For example, electorally, although Maharastra can be deemed a failure since he masterminded a Thackeray becoming the CM, it would still be deemed as a success.

Is Prashant Kishor pushing for a 'BJP-Mukt' India? Could the reason for assisting political factions and splinter parties across the country be a set up for something more than meets the eye? Considering Prashant Kishor is working for smaller parties across the nation, some of which are still BJP allies, does this imply that the organisation will continue the Maharashtra strategy by working with the "enemy" until they can ouster the BJP from the Centre as well? It's a tightrope walk ahead for Prashant Kishor-led I-PAC and the organisation's credibility rests heavily on whether or not he is able to secure TMC's win in 2021.

PEOPLE HAVE PLEDGED SO FAR
Prashant Kishor responds to rumours of working for multiple parties, gets sarcastic
Nitish Kumar's close confidant RCP questions Prashant Kishor's contribution to JD(U)
Prashant Kishor's IPAC makes huge claim about AAP as it joins forces with Arvind Kejriwal
After masterminding 'Sonia Sainiks' what will Prashant Kishor do now? Details here
65K posters, hoardings removed in compliance with poll code in south Delhi: SDMC
Latur civic bypoll: Cong defeats BJP
AAP will fight Delhi Assembly election on basis of its govt's work: Kejriwal
DO NOT MISS
OWAISI CHALLENGES ANURAG THAKUR
INDIA DEFEATS AUS IN U19 WC
YOGI: I AM NOT ANTI-MUSLIM
AYUSHMANN ADMITS TO SLIP IN COMMENT
WHY 2020 BUDGET IS THE TOUGHEST ONE
LIFE INSURANCE FOR NRI IN INDIA