On Friday, BJP leader Dr. Kirit Somaiya wrote a letter to Shiv Sena Supremo and Maharashtra Chief Minister Uddhav Thackeray requesting him to take action on illegal Bangladeshi immigrants in the state now that the Citizenship (Amendment) Act had been cleared by both houses in the parliament. He spoke about how the former saffron allies had worked towards weeding out such illegal immigrants in Maharashtra and had raised voices of concern and now the Sena government could finally go ahead and tackle the issue with a law in place.

In his letter he named places in and around Mumbai such as Shivaji Nagar, Gowandi, Chandiwali, Thane, Bhayander, Navi Mumbai, saying that these places, in particular, have a lot of illegal Bangladesh immigrants, therefore, need to be taken care of.

Earlier, Congress Maharashtra Minister Nitin Raut categorically stated that the grand old  party will not allow the Citizenship Amendment Act to be implemented in the state. 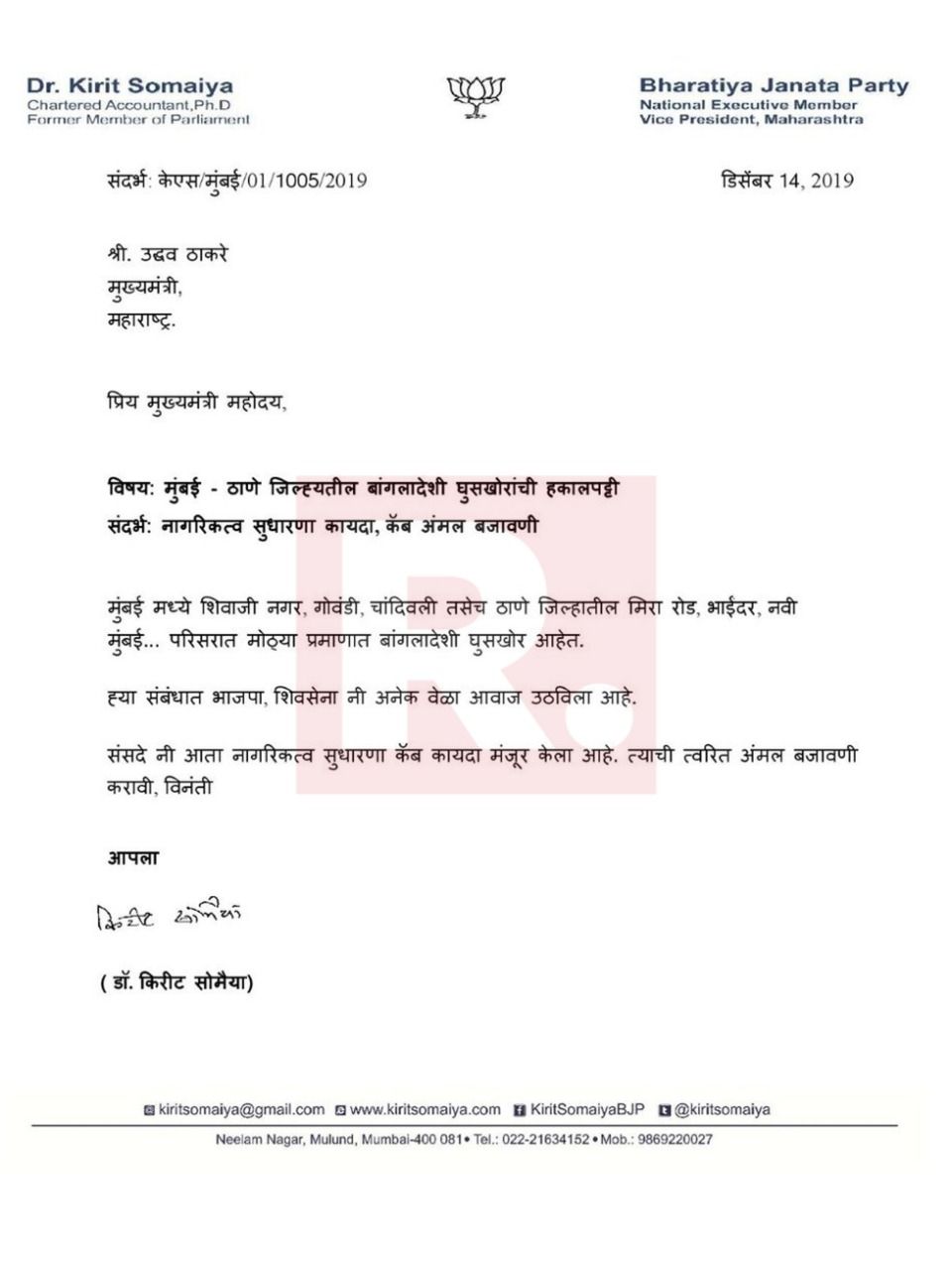 Read: Cornered on CAB by Congress, Shiv Sena says CM Uddhav will 'speak to everyone'

Recently Shiv Sena's Eknath Shinde stated that the decision over the implementation of the Citizenship (Amendment) Act, 2019, will be taken after holding a decision with the leaders of all three parties. This comes at a time when NCP and Congress have been pressurising the saffron party to reject the Act in Maharashtra. Meanwhile, Captain Amarinder Singh, Kamal Nath, Mamata Banerjee, Pinarayi Vijayan, and Bhupesh Baghel the chief ministers of Punjab, Madhya Pradesh, West Bengal, Kerala, and Chhattisgarh respectively have refused the implementation of the Bill in their states.

After voting in favor of the Citizenship (Amendment) Bill, 2019 in the Lok Sabha, BJP's former ally backtracked from its decision in Rajya Sabha. Shiv Sena said that they would support the Bill only if their queries are clarified by the government. However, in the media interaction, Shinde denied claims of any pressure from their alliance partners--Congress and Shiv Sena. Shinde said, "Shiv Sena, made its stand clear in Rajya Sabha. We walked out as we didn't get our answers. CM will speak to the leaders of all three parties and then a decision will be taken. Uddhav is the leader of our alliance and this is a government for all the people. In this state, people of all faiths, religions live. No one should be under any fear over religion, faith or caste."