The Delhi Commission for Women (DCW) has issued notices to Facebook, Instagram, Twitter and TikTok, seeking details of their standard operating procedures. This comes a day after TikTok suspended an account over a controversial video, glorifying 'acid attack' on women.

The DCW has taken suo-moto cognizance of the rising trend of use of social media platforms for posting abusive and provocative content. DCW officials say that it has been seen that a large number of videos, photos and posts depicting violence and harassment, especially violence against women and children, are being posted and shared on the social media platforms.

"In the past few days, tons of such content has come to light. While a blanket ban on such platforms is not a solution, it is critical that proper mechanisms are put in place to prevent such posts from being uploaded and if uploaded, the content and the creator should be immediately removed from the platform," DCW's letter stated.

It has asked the platforms to inform about the time taken for removal of such content from receipt of a report from other users, and details of processes in place for reporting such content to the law enforcement. The notice asked social media platforms have to share the information with DCW by May 25, failing which appropriate action will be taken. The commission is also preparing a detailed recommendation for the government over the same issue. 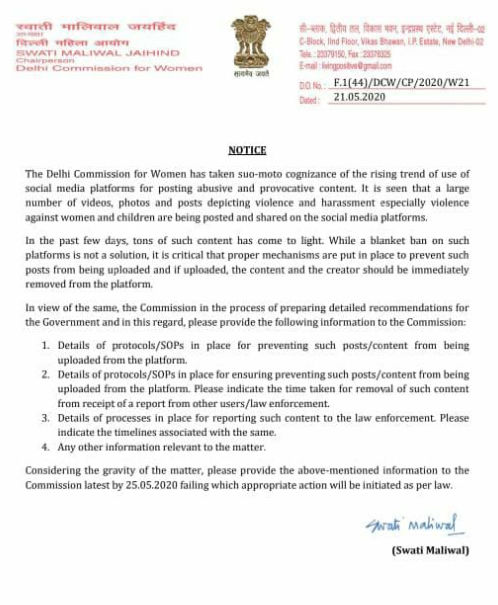