Terming it as a 'toolkit,' 18-year-old activist Greta Thunberg called for people to refer to the document if they wanted to 'help' in the farmers' agitation 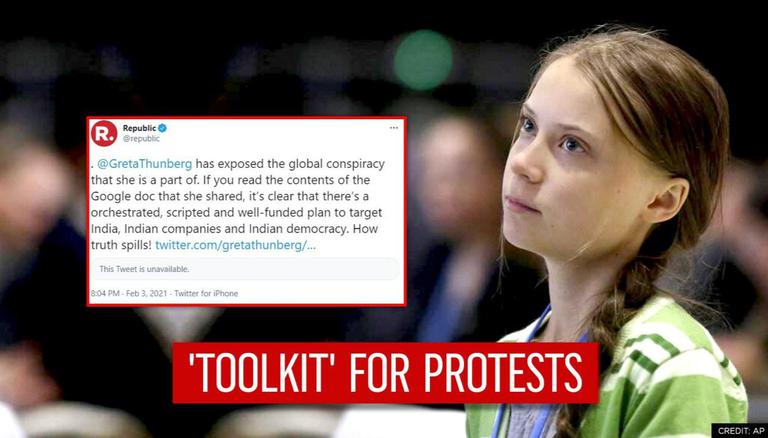 After having waded into the ongoing farmers' agitation in India, environmental activist Greta Thunberg had shared an elaborate document on ways to intensify the stir. Terming it as a 'toolkit,' the 18-year-old activist who shot to fame with her 'Fridays for Future' movement in 2018 called for people to refer to said 'toolkit' if they wanted to 'help' in the farmers' agitation. The document titled - Ask India Why - consists of detailed instructions to target the Indian government and a few Indian corporate enterprises, in garb of the farmers' protest. After the tweet and its contents were highlighted by Republic Media Network at 8:04pm on Wednesday, Thunberg deleted it by 9:27pm the very same day

Earlier in the day, Greta had shared a news report on Twitter about internet shutdowns in Delhi as a result of clashes between the protestors and the police personnel and wrote, "We stand in solidarity with the #FarmersProtest in India." This had followed other global personalities such as Rihanna, Meena Harris (niece of US VP Kamala Harris), Lilly Singh, Mia Khalifa and Jay Sean also remarking on the protests in quick succession.

What's in the document Greta Thunberg shared about India?

The 6-page document shared by Greta Thunberg seems to have been in circulation since early January as it includes plans to intensify the protests on January 26, on the occasion of Republic Day, when violence broke out on the streets of the national capital. The document seeks 'on-ground action' by exhorting people across the globe to protest outside the closest Indian embassy in their region and share pictures of the same.

The alleged 'toolkit' to protest also asks people to storm Twitter and tag several highly-placed offices in their messages.

The premeditated and pre-scripted nature of the protest was exposed by the now-deleted ‘toolkit’ that said “TwitterStorm on 4th and 5th February, 2021 - 11 am to 2 pm UTC”. The point by point instructional nature of the deleted ‘toolkit’ indicate that a well-funded  and well planned propaganda campaign has been at work to under mine India.

The ‘toolkit’ establishes there was nothing organic about the protests. It contained a dedicated section that called for “Physical Actions - Near Indian Embassies, Govt. offices, Media houses (or even Adani-Ambani offices) globally - 26th January.”

Moreover, the document also constitutes a plan to intensify the global protests against the Indian government from February 21-26. Apart from on ground protests, the 'toolkit' shared by Greta Thunberg comprises bizzare campaigns against alleged human right violation and harmful policies which violate the Constitution.

"India has a long history of human rights violations, violence and a cruel indifference for its most vulnerable citizens. On January 26th the government will be celebrating the adoption of its constitution with a military parade, while continuing to perpetuate harmful policies that violate their own Constitution," reads a line from the document.

The sole intent of the ‘toolkit’ appears to have been to run down India with lies and fabrications given the document spoke of a possible “massacre/genocide”. It declared,  “International focus on these protests may be the only thing preventing more state-sponsored violence and another massacre/genocide in India.”

Interestingly, the now deleted toolkit interlinked to another Google document titled “Cheat Sheet” that claimed to be an explainer on the Farm Laws but instead spread a canards abot Indian democracy and the Indian Prime Minister. It said,  “ Modi, and members of his party are long time members of the RSS (Rashtriya Swayamsevak Sangh), a powerful group rooted in fascist ideology, known to be anti-Muslim, anti-Christian and pivotal in the rise of Hindu nationalism in India.”

Within an hour of Republic TV exposing these details, Thunberg deleted the tweet containing the malicious global call-to-action against the country. The contents of the said document made it clear that there is an orchestrated, scripted and well-funded plan to target India, Indian companies and Indian democracy. Republic's tweets exposing the conspiracy which had tagged the environmental activist and her post featuring the document now shows 'This tweet is unavailable'.

#IndiaAgainstPropaganda #IndiaTogether | Who has elected Rihanna? Who has elected Mia Khalifa? It's a global conspiracy; some are roving globally asking 'tweet kar do, tweet kar do': @shaziailmi, Leader, BJP https://t.co/RZHKU3wOei

. @GretaThunberg has exposed the global conspiracy that she is a part of. If you read the contents of the Google doc that she shared, it’s clear that there’s a orchestrated, scripted and well-funded plan to target India, Indian companies and Indian democracy. How truth spills! https://t.co/SOu2ezHVJP

Those who are part of this conspiracy to incite violence in India are refusing to accept the consequences of their actions. The google doc shared by @GretaThunberg exposes the plot in all its murky details. https://t.co/SOu2ezHVJP

Issuing a statement on comments by several foreign individuals on the farmers' stir, the MEA said that before rushing to comment on such matters, it urges that facts be ascertained and proper understanding of issues at hand be undertaken. "Temptation of sensationalist social media hashtags and comments, especially when resorted to by celebrities and others, is neither accurate nor responsible," the statement said. In a strongly-worded statement, the MEA made it clear that the farm reforms were enacted by the Parliament after a full debate and discussion. Maintaining that only a very small section of farmers have reservations about these laws, it mentioned that the Centre has not only conducted 11 rounds of talks with farm unions but also offered to keep the implementation of the laws on hold.

It is pertinent to note that the Supreme Court has already stayed the implementation of the farm laws and formed a committee to resolve the impasse between the protesting farmers and the Union government. The MEA lamented that "vested groups" were trying to derail the protests despite this scenario. To buttress its point, it highlighted the violence that took place in the national capital during the farmers' tractor rally.