Rubbishing claims of 'inadequate medical facilities' at Army hospital in Leh, Indian Army on Saturday said that the injured jawans were being treated properly

Rubbishing claims of 'inadequate medical facilities' at Army hospital in Leh, Indian Army on Saturday issued a statement assuring that the jawans who were injured in the Galwan clashes were being given the best possible treatment. The Army clarified that the ward where PM Modi visited on Friday was part of the Hospital's 'Crisis expansion' with a capacity of 100 beds. Furthermore, the Army said that amid the COVID-19 outbreak certain wards had been converted into isolation facilities, necessitating the Training Audio Hall to be converted into a ward where the jawans have been treated since their arrival. 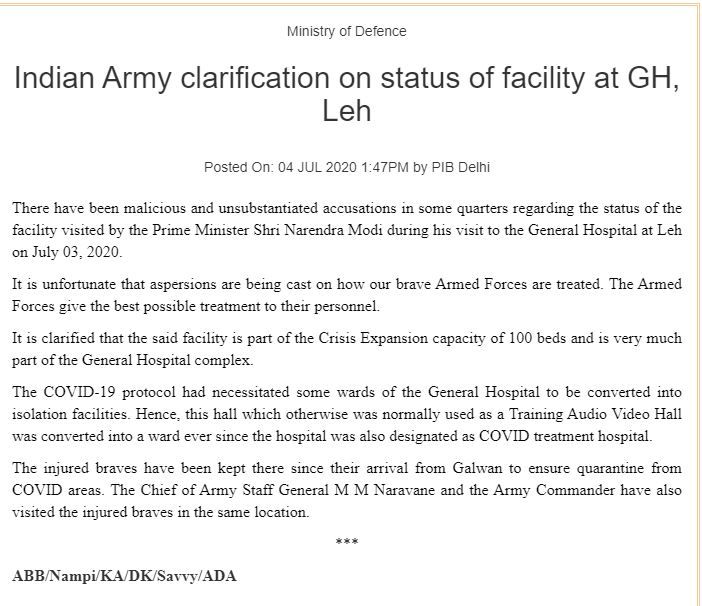 Certain Congress leaders - Sachin Sawant and Abhishek Dutt, along with several other Twitter handles had shared photos from PM Modi's visit alleging it to be 'PR stunt'. Furthermore, they alleged that as none of the jawans were bandaged and were sitting on their beds, the whole visit was 'fake'. Some even pointed out to a projector in the Training room, alleging some bizarre theories like media 'obscuring' people's visions.

After addressing the Indian troops at Nimu base in Ladakh, PM Modi on Friday, visited the jawans who were injured in the Galwan clashes, admitted to the Army hospital. He saluted their sacrifice and said that all 130 crore Indians were inspired by their valour. Moreover, he added the entire world was analysing their feat and saluted the jawans' mothers too.

"My 130 crore citizens are proud of your valour and your bravery inspires us for a very long time. In the current situation in the world, there is discussion of the feats of India's brave soldiers. The world is analysing your valour, the heights of your sacrifice, the extent of your dedication," he said.

The third meeting between Indian and Chinese senior military commanders at Chushul on June 30 emphasised on 'expeditious, phased, and stepwise de-escalation'. In the previous talks between the two sides, India demanded a return to status quo in April, asking the Chinese to remove the additional buildup done in the Galwan and Pangong Tso areas. In diplomatic talks too between  External Affairs Minister S Jaishankar and  Chinese Foreign Minister Wang Yi, both sides have maintained that the situation would be handled in a responsible manner and India and China shall hold more meetings to arrive at a mutually agreeable solution and to ensure peace along the LAC as per bilateral agreements.