Smriti Irani Wishes Her Mom On Mother's Day, Says 'I Get My Crazy From Her'

On the occasion of Mother’s Day, Bhartiya Janta Party (BJP) Minister, Smriti Irani took to Instagram to wish her mother by posing a 'crazy' picture of her.

On the occasion of Mother’s Day, Union Minister, Smriti Irani, took to Instagram to wish her mother. While sharing a funny picture of her mother, the Union Minister wrote, “I get my crazy from her. Happy Mom Day”. In the image, one can see the minister’s mother sticking out her tongue in a playful manner and posing for the camera. 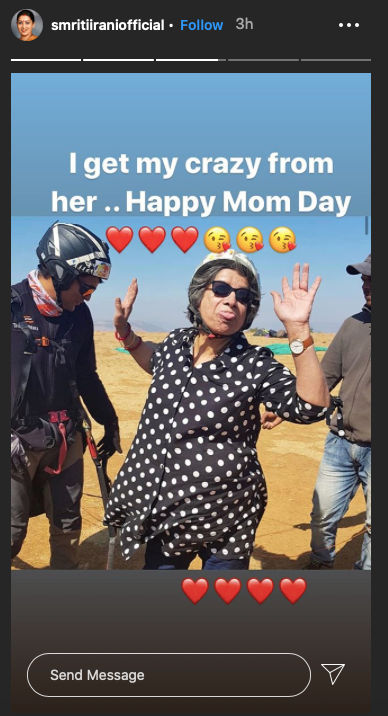 While the Instagram story reminded everyone of all the crazy times, Irani also shared a Clavin and Hobbes comic meme to celebrate the day. In the meme, one can see Calvin walking with his mother while the mother says, “Someday I hope you have a kid that puts you through what I’ve gone through”. Meanwhile, Calvin replies saying, “Yeah, Grandma says that’s what she used t tell you”. 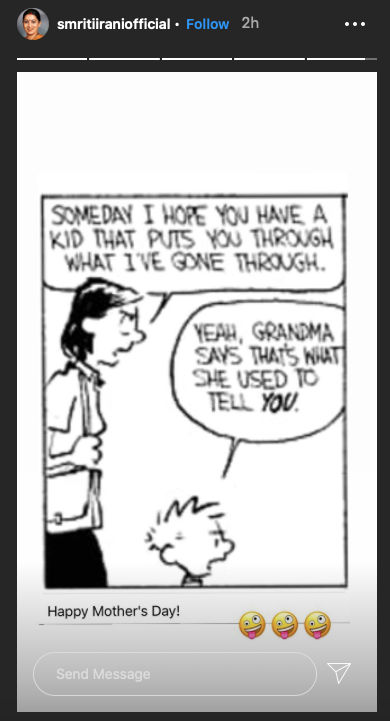 Not so surprisingly, Irani also took part in the gibberish challenge and rightly guessed the answer to the quiz. While the answer was ‘Despacito’, at the end of the clip, she could also be heard saying “Not bad for my age”. 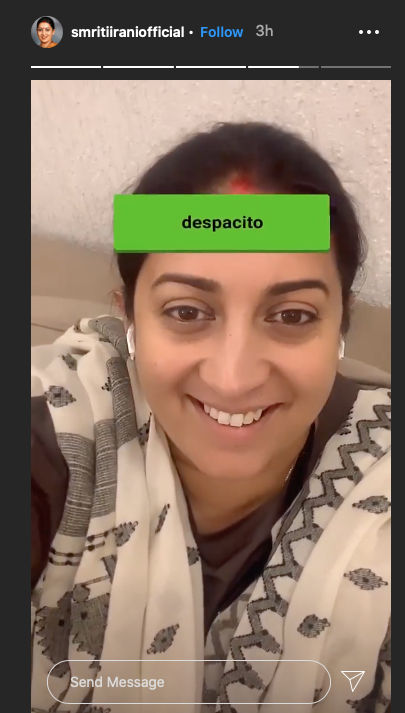 The 44-year-old minister is known for an impeccable sense of humour and viral posts. A while back, Irani also tried her hand at the viral 'Guess the Gibberish' challenge on Instagram. Taking to stories, she posted two videos wherein she could be seen acing the challenge. In the first, she successfully cracked 'all huck each arm' as 'lucky charm'. Irani also guessed the second one 'huge act mend' correctly as ' Hugh Jackman' but surprisingly, the answer turned out to be 'Ryan Reynolds'. The answer for the second one left the minister stunned and her frowned expression said it all.

She also shared a throwback video on Instagram from the year 2004. The video clip is the title song of the Star Parivar Awards and in the caption, she called them the ‘extended family’. She also urged people to make a phone call to friends and family during such unprecedented times. She said, “Many are a phone call away; so during this lockdown make a call to an old friend from work.. kya pata they might remember us as fondly as we do”.

READ: Smriti Irani Pens Poem To Thank Lyricist Gulzar Who Is Helping Her Get Over 'Corona Blues'

PEOPLE HAVE PLEDGED SO FAR
LATEST NEWS
View all
4 hours ago
Assam can be gateway to south-east Asian markets: Official
4 hours ago
Indore, Ujjain on alert as Cyclone Nisarga likely to enter MP
5 hours ago
India to bring specific proposals to military talks with China on June 6: Sources
4 hours ago
VCs council takes exception to WB Guv's letter
4 hours ago
ICMR issues list of approved Ig-ELISA kits to be used for COVID-19 serosurvey & monitoring